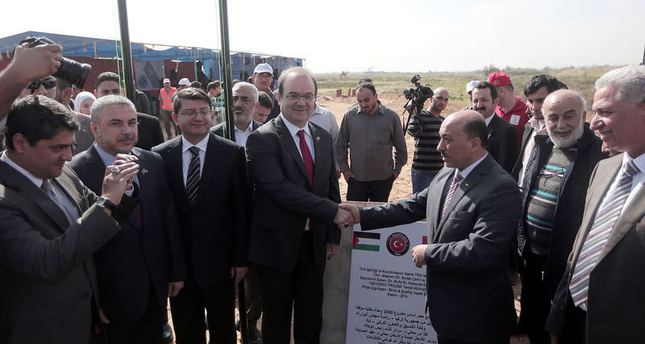 The TIKA-financed project, which entails building 1,000 prefab housing units, serves as a Turkish contribution to support those negatively affected by the recent Israeli offensive, Sarnic said at the launch ceremony.

The Turkish Consul-General in Jerusalem, Mustafa Sarnıç, and Turkish Cooperation and Coordination Agency (TİKA) chief Serdar Çam laid the foundation stone for a Turkish-fundedhousing project on Monday, for families affected by the recent Israeli onslaught on the embattled enclave.

The TİKA-financed project, which entails building 1,000 prefab housing units, serves as a Turkish contribution to support those who have been negatively affected by the recent Israeli offensive, Sarnıç said at the launch ceremony.

For his part, Çam described the project as a "message to the people of Gaza to remain steadfast and keep alive."

He went on to say that the housing units were "nothing but a simple token to enable the free Palestinian people to carry on with their lives."

He also noted that the housing units would provide temporary shelter to affected families to help them overcome the crisis.

"Since the end of the Israeli war, we have been working on planning the project to provide shelter to those affected," Çam added.

During Israel's recent offensive, 15,671 housing units across the coastal strip were damaged, including 2,276 that were totally destroyed, according to official Palestinian figures.

More than 2,160 Gazans, meanwhile, mostly civilians, were killed – and some 11,000 injured – during seven weeks of unrelenting Israeli bombardment through July and August.

The Israeli offensive finally ended on August 26 with the announcement of an indefinite cease-fire agreement.