Reconciliation process to proceed as before: HDP deputies 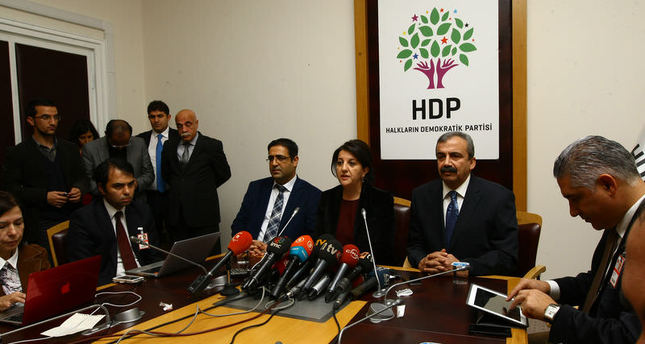 by daily sabah
Nov 12, 2014 12:00 am
Deputies from the Peoples' Democratic Party (HDP) released a press statement about the situation of the reconciliation process on Wednesday in which they said there is a common will on behalf of all sides to continue with the process. They also noted that the delegation that visits the PKK's imprisoned leader, Abdullah Öcalan at the prison on İmralı Island, would not be changed.

Claiming that there are disputed topics related to the reconciliation process, Istanbul Deputy Sırrı Süreyya Önder said it is unreasonable for the two sides to argue when both of them agree upon the final goal. Önder continued by saying that the mutual will that had been shaped by the framework of peace and democracy toward resolving the Kurdish issue is significant. He said that although Ankara and the Kurdish side still disagree on some issues, both sides agree on numerous issues that he said makes up the basis of the reconciliation process.

Ankara made clear that it would not pursue the reconciliation talks that have been ongoing since 2012 with the HDP unless it convinces the government of its sincerity in the process.

The government has revealed its stance over the matter and stipulated that for the resumption of the process the HDP must refrain from provocative acts that might impair public order, referring to the HDP's call for street protest for Oct.6-7 in support of Kobani, which morphed into fierce clashes between anti- and pro-PKK groups and claimed dozens of lives.

Urging the party to adopt a softer and more peaceful stance and to refrain from any statement that triggers those who aim to disturb public order, Ankara clarified that public order comes first as the reconciliation process is not an alternative to public order, according to Prime Minister Ahmet Davutoğlu.

HDP Group Deputy chairwoman Pervin Buldan revealed that the party has applied to the Ministry of Justice for permission to visit Öcalan on İmralı Island. She argued that it is crucial to open channels of dialogue as soon as possible and take concrete steps for negotiation and said that the HDP is ready to participate in finding a permanent resolution to the Kurdish issue. Buldan put special emphasis on increasing the frequency of discussions, improving their efficiency and including democratic mechanisms, rather than blocking them, as tensions build.

In response to the HDP's statements about the reconciliation process, Justice and Development Party (AK Party) Group Deputy chairman Naci Bostan spoke in a televised interview on Wednesday and reiterated that common will is necessary and highlighted that it is crucial to move away from the rhetoric of violence and conflict to ensure social unity. Bostan said that the government hopes to see the HDP actualize what they say and urged all political parties to support the reconciliation process. He explained this is crucial since international examples show that the support of all sides is necessary to reach a permanent resolution.

Speaking after a cabinet meeting on Tuesday, Deputy Prime Minister Bülent Arınç told the HDP to stop shuttling between the PKK headquarters in the Qandil Mountains in Iraq and its imprisoned leader, Abdullah Öcalan, and instead draw its own road map for the settlement.

The PKK leadership in the Qandil Mountains and leader Öcalan have a perceived disagreement on the ongoing peace process, as PKK umbrella organization Kurdish Communities Union (KCK) co-chair Cemil Bayık, in a comment to the British daily The Independent, said on Wednesday, "If Kobani falls or Jabhat al-Nusra attacks then it will no longer be possible for the peace process to go on with Turkey."

Ankara initiated the reconciliation process in early 2012 to end the 30-year PKK conflict and address the issues of Kurds as part of democratization packages. Accordingly, a series of democratic reforms were carried out to empower minorities, including lifting barriers on language and removing many of the obstacles that Kurds have faced.

Davutoğlu has consistently repeated that the reconciliation process is a unique and local initiative that will reach the desired point if all sides fulfill their responsibilities.