Deputy PM: For Muslims, Al-Aqsa is a 'red-line' 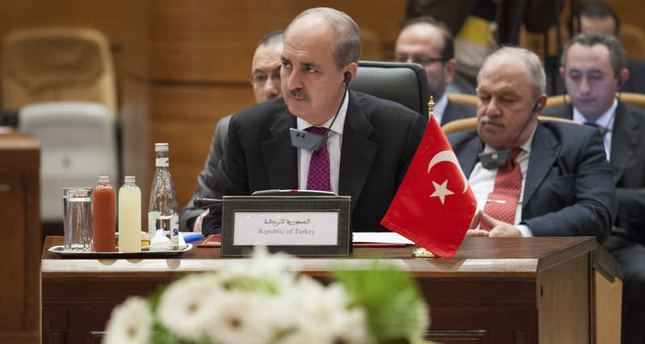 by Daily Sabah with AA
Nov 13, 2014 12:00 am
The Islamic world must send a message that the "Al-Aqsa Mosque is a redline for all Muslims," Deputy Prime Minister Numan Kurtulmuş said on Wednesday.

Kurtulmuş's remarks came a week after the Al-Aqsa complex in Jerusalem, which represents the world's third holiest site for Muslims, was stormed by a group of Jewish settlers and Israeli security forces.

"These acts reveal disrespect from Israel for Muslim values and sensitivities, and constitute an obvious breach of its obligations under international law," Kurtulmuş told the Quds Contact Group meeting of the Organization of Islamic Cooperation in Moroccan capital Rabat. Al-Quds is the Arabic word for Jerusalem.

During the attack, heavily-armed Israeli security forces broke into the Al-Aqsa Mosque with their boots on, and shot rubber bullets at Palestinians worshipping in the mosque.

The violence followed a call by several extremist Jewish groups for mass intrusions into the Al-Aqsa Mosque, after the shooting a week ago of a Jewish rabbi, Yehuda Glick, who many considered to have extremist views.

"As organization members, we are responsible for defending the holiness of Al-Aqsa and Haram al-Sharif," he said.

Kurtulmuş said the Haram al-Sharif site has been suffering more attacks than in the past by Israel. "We must be on full alert as Muslims against Israeli plans to divide Haram al-Sharif in terms of places and worshipping time," he added.

Tension has been running high since late last month, when Israeli authorities temporarily closed the al-Aqsa Mosque complex in East Jerusalem after the attack on the extremist Jewish rabbi.

Further aggravating the situation, several Israeli parliamentarians have entered the Al-Aqsa complex in recent weeks, drawing the ire of Muslim worshippers and official condemnation from Arab and Muslim countries.

"We have to act in solidarity to reject these plans, and see that they fail," Kurtulmuş said.

The Turkish minister also noted that further efforts are needed to get support from various groups in the West, by "establishing contact, and forming a coalition with NGOs, political parties, academicians and those sympathizing with the Palestinian cause."

"Gaza, where more than 2,100 Palestinians were killed and over 11,000 others wounded during Israel's 51-day deadly bombardments from July to August, still resembles an open prison," he said.

Kurtulmuş detailed Turkey's priorities on the following issues at the meeting:

- To increase humanitarian aid for Gaza and all Palestine immediately.

- To intensify efforts for maintaining a permanent cease-fire in Gaza, and lifting the Israeli siege.

- To support and cooperate with the U.N. Human Rights Council to ensure that Israel will be held accountable for the crimes it has committed.
- To step up efforts to rebuild Gaza.

- To launch a campaign to have the Palestinian state join all international organizations.

- To establish dialogue with Jewish individuals and groups that disapprove of the policies of the Israeli government.

- To form a task force to determine legal steps to bring charges against Israel before international tribunals.