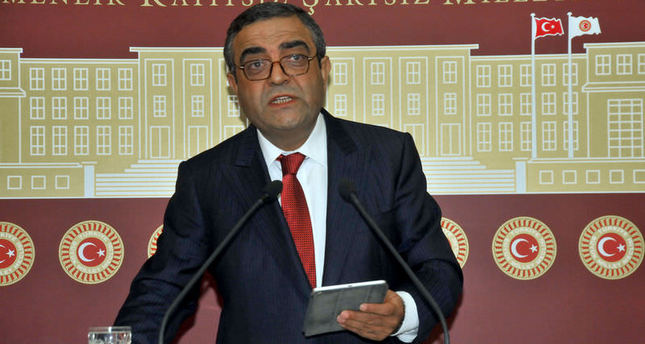 by Daily Sabah Nov 13, 2014 12:00 am
Internal disputes about the Dersim incident continue to stir Turkey's main opposition, the Republican People's Party (CHP). Different factions within the party have had ideological clashes over numerous issues, the latest of which comes as CHP deputies criticize remarks made by CHP's Vice President Sezgin Tanrıkulu about the Dersim incident.

Tanrıkulu had recently apologized on behalf of the party for the Dersim incident, which took place in the predominantly Alevi region in 1937, which resulted in the killing of over 10,000 people who rebelled against Turkey's Resettlement Law of 1934. CHP deputies panned him for making remarks on behalf of the party.

"I apologize a thousand times to everyone who suffered in Dersim on behalf of CHP" Tanrıkulu said in a televised discussion program, while underlining the fact that he is the vice president of CHP. He further noted that Kemal Kılıçdaroğlu, the party's leader, was aware of his participation in the TV program, implying that his apology was not only personal. Tanrıkulu argued that the issue cannot be resolved by a mere apology and expressed that the establishment of an investigation commission was crucial to address the issue. More importantly, Tanrıkulu called officials to open all archives to shed light to the issue as he claimed they were currently only partially open.

Şahin Mengü, who formally served as a CHP Deputy, harshly responded to Tanrıkulu's remarks on his Twitter account and made derogatory statements about Tanrıkulu. "You cannot apologize on behalf of CHP" said Mengü, who stated that, if an official apology was necessary, it should be done through a decision taken by the party assembly and not by individuals. He argued that it was up to historians to determine whether there was a massacre in Dersim, rather than politicians, and stated that no apology should be made until concrete historical evidence have been found.

A close look at CHP's past indicates the party's hesitance to address the Dersim incident. CHP's former provincial chairman, Muzaffer Değer, was dismissed from his duty for apologizing on behalf of CHP for the incident in 2011 when he apologized to the people of Dersim, those who were killed in the incident and their relatives. "I request the restoration of my honor and my position as the party's Diyarbakır chairman from CHP's respected president" said Değer, on Thursday, who noted that he was dismissed from his duty on the day that he made the apology, while the party's headquarter executive Mesut Değer only received a suspension.

Dersim Massacre is described as one of the most tragic incidents of the Turkish Republic when ethnic minority groups consisting of Alevi Kurds and Zazas in the southeastern region of Dersim – now called Tunceli- rebelled against Turkey's Resettlement Law of 1934 imposed by the Republican People's Party (CHP), the only political party at the time. The law forced the relocation of people to pursue cultural homogeneity and exert the newly established state's authority in the region. People, including civilians, faced military intervention, including airstrikes, resulting in the mass killing of over 10,000. Sabiha Gökçen, one of Mustafa Kemal Atatürk's adopted daughters and the world's first female combat pilot participated in the airstrikes and revealed afterwards that they were given the order to strike everything that was alive, including animals.

While CHP has not claimed responsibility for the incident, President Recep Tayyip Erdoğan, apologized on behalf of the Turkish state in 2011, when he was Prime Minister, and harshly criticized CHP for disregarding the incident.

Prime Minister Ahmet Davutoğlu has recently claimed that opposition leader Kemal Kılıçdaroğlu is hesitant to make remarks about Dersim as he is scared about the reaction of neo-nationalists within CHP who claim the party cannot be held responsible for the incident.