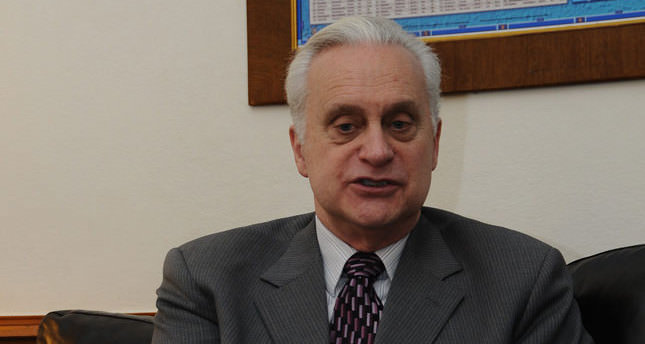 by daily sabah
Nov 13, 2014 12:00 am
Former U.S. ambassador to Ankara, Francis Riccardone, said that it is not possible to see stability in the Middle East until Turkey and Israel find a common point for cooperation.

Ricciardone, who recently retired after three years of service as the U.S. ambassador to Turkey, said that Turkish-Israeli relations are the determinant powers for establishing stability in the Middle East.

Speaking on a panel titled, "Atatürk's Legacy in the U.S.-Turkey Relations," Ricciardone expressed his wishes to see normalized relations between Turkey and Israel in a response to a question of the U.S. approach to the relations between these two countries.

The crisis between Turkey and Israel first flared up after the war in Gaza in early 2009. Relations were completely frayed and diplomatic relations between countries were severely strained in May, 2010 when eight Turkish citizens and one Turkish-American were killed in international water by Israeli commandos on the civilian Mavi Marmara flotilla that was carrying humanitarian aid to Gaza. Severe tensions between Turkey and Israel resulted in Turkey's September 2011 decision to withdraw its ambassador, since the then prime minister, Recep Tayyip Erdoğan, described the flotilla raid as "state terrorism." Ankara's initial effort to downgrade diplomatic relations also resulted in a unilateral suspension of military cooperation between the countries. Two years later the Israeli government took the first step toward reconciliation in March 2013 and Israeli Prime Minister Benjamin Netanyahu apologized at a conference for the misconduct during the raid on the Mavi Marmara flotilla.