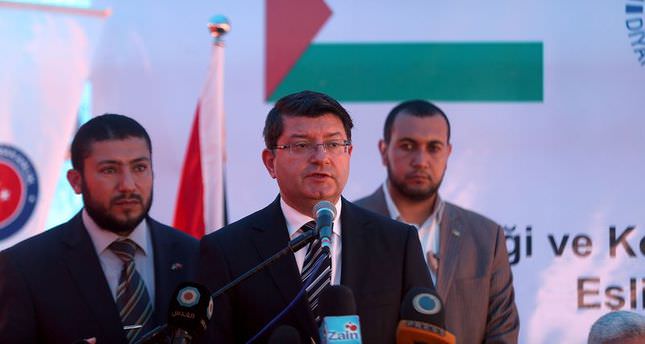 Sarnıç said that TİKA, the Turkish Red Crescent, the Disaster and Emergency Management Authority (AFAD) and various other humanitarian aid agencies are working efficiently to aid development in Palestine. "Above all, our humanitarian assistance – especially food and fuel – has never ceased. With the request of the Palestinian government, TİKA started a housing project that will shelter 1,000 families, for which we held an inauguration ceremony on Sunday. The other major project is to build an electricity generating vessel to provide electricity in Gaza," Sarnıç said.

The international humanitarian agencies and various foreign organizations congratulated him, TİKA and other Turkish officials after giving a start to the housing project, Sarnıç said, adding, "Our contribution to Palestine encourages others to take part too. Palestinian officials also express their gratitude each time we come together."

"With our officials, nongovernmental organizations and media here in Palestine, we are always welcomed as we support bringing a permanent solution to the Palestinian issue. The international community has also spoken out now and strictly underlined that occupation cannot be accepted, the Gaza siege should be stopped, Al-Aqsa Mosque, which is a holy site of all Muslims, should not be touched," Sarnıç said.

Commenting on Turkey's support for the Palestinian unity government, Sarnıç said Palestinian unity is an important step in solving the decades-long troubles and is a "chance" for unity. "As mentioned in the unity agreement, the sides shall hopefully follow the steps agreed to and maintain democracy. The political unity is vital as separation worsens the pain that people suffer. When we met [Palestinian] Prime Minister [Rami] Hamdallah today, he also thanked us for supporting the unity government," he said.