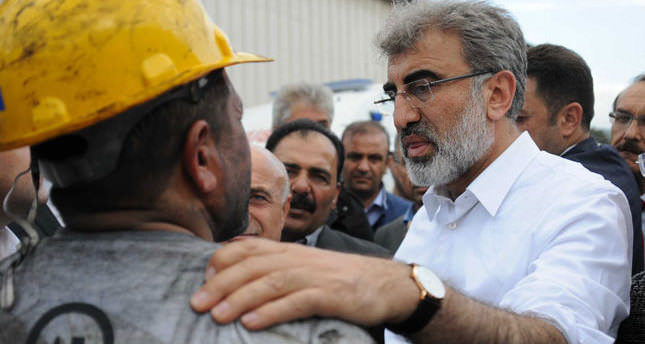 Following Energy and Natural Resources Minister Taner Yıldız's statement, Prime Minister Ahmet Davutoğlu slammed opposition Republican People's Party (CHP) members who called on Yıldız to step down and said it was not their business to decide whether he should or should not resign.

"It is conceivable that an opposition party calls for [someone's] resignation. Don't get the idea that I'm not assessing the calls," Yıldız said.

Yıldız began facing resignation calls after the deadly Soma mine disaster that took place in western Turkey that left 301 miners dead in a fire. The disaster was the deadliest mining incident in Turkey's history, surpassing the death toll of a firedamp explosion that killed 263 miners in Zonguldak in 1992.

Despite increased inspections and improvements in workplace conditions for miners, another mine accident also hit Turkey roughly two weeks ago, which left 18 miners trapped in a flooded mine in Ermenek, a town located in the central Turkish province of Karaman.

Following this year's mine accidents that have rocked the country, any possible violations that may have caused the accidents have started being questioned. There have been persistent calls for government officials to step down, which until now were left unanswered, and Yıldız has been among those who came under the harshest fire from opposition party members following the incidents.

"I have conveyed the calls of resignation to the cabinet where I will also consult with Prime Minister Davutoğlu over my friends' request for my resignation." Yıldız added.

Meanwhile, the government stepped up its efforts to improve the working conditions of miners following the accidents. An omnibus bill, which includes litigation for the mining industry that was tabled after the Soma coal mine disaster in May was passed by Parliament in September.

According to the bill, which aimed for better conditions for miners, the insurance debts of mine workers who lost their lives in the Soma mining disaster will be canceled. The families of the victims of Soma will receive a pension regardless of their monthly income. One of the relatives of each Soma victim will also be provided with the right to reside in state institutions.

The bill came as a relief to miners. According to the bill, the seniority requirement will be removed and miners' working time is not to exceed 36 hours per week and six hours a day. The retirement age will also be reduced to 50 from 55. Paid leave, annual leave, education and course duration, the period of preparation before and after work and national holidays, will be counted as working time for laborers who are insured to work in areas such as mines, tunnels and drain construction sites, and employers will have to assign a job security expert as well as a doctor and health staff. The miners working in lignite (brown coal) and coal mines are also not to be paid less than double the minimum wage.

Davutoğlu announced 10 days ago that an exclusive hotline will be established by the Prime Ministry that will enable workers to express their concerns about their working conditions. "Employers are obliged to provide employees with working conditions as outlined by the law" Davutoğlu said, urging workers to voice their concerns in the case that their rights are violated by employers. "Complain about them when you believe your rights are violated and are exploited," Davutoğlu said and emphasized that employers look for loopholes to avoid fully implementing new laws and regulations that improve working conditions.

Referring to Ermenek mining accident, Davutoğlu said that the new law reducing the daily working hours of miners from eight hours to six hours does not mean that employers could force their employees to have their lunch underground in the mine to supposedly save profits. "Such actions are a disgrace to human dignity," said the prime minister, who expressed that the hotline will allow workers to inform authorities of such violations with the hopes to prevent and reduce the amount of future accidents.