Removal of Assad imperative for stability in the region, says Turkish PM 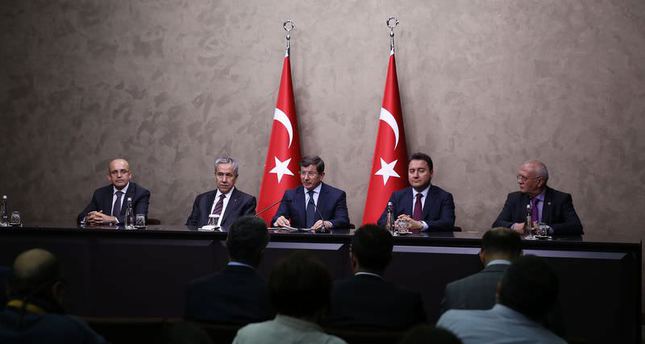 Calling for a comprehensive strategy in Syria and adding that removing Assad is a must for stability, Prime Minister Davutoğlu reiterated that Turkey will support a strategy change in U.S. policies on Syria

Turkish Prime Minister Ahmet Davutoğlu, at a press conference held in Australia as part of the G20 Economic Summit, said on Friday that a comprehensive solution to deal with all sides of the problems in Syria is necessary, in reference to reports in international media outlets saying that U.S. President Barack Obama is to amend strategies toward the Bashar Assad regime in Syria.

Davutoğlu touched on Ankara's long-time desire for an integrated strategy in Syria as well as in the Middle East, to end the terrorist activities that have metastasized in the region.

According to some media outlets, Obama is seeking to change U.S. policy on Syria and asked his national security team for another review of the strategy on Syria as only defeating the Islamic State of Iraq and al-Sham (ISIS) in Iraq and Syria may not produce the expected results without a political transition in Syria and the removal of the Assad regime. These allegations have been dismissed by Secretary of Defense Chuck Hagel, who said that there is no change in the strategy for Syria.

"The military is not the only problem in Syria. It is neither a terror issue nor a political one. We are facing a humanitarian tragedy in which a regime has killed its own people and war crimes are being committed," Davutoğlu said, calling for a broader strategy instead of focusing on one point.

"International terror is a threat to all countries including Turkey. Turkey does not want a terrorist organization on its border, but [ISIS] was not [on the border] last year," Davutoğlu said questioning how ISIS arose in the first place. Calling for comprehensive policies, he said that ISIS emerged as a result of the political gap created by the Assad regime's war crimes and that the ISIS crisis caused a greater focus on the threat in the last few months and Turkey is never against it. He said that the U.S.-led coalition's airstrikes in the besieged Syrian Kurdish town of Kobani is not enough, because if a comprehensive strategy is not applied for Syria, other terrorist organizations may spread as long as political stability is not established.

The prime minister also echoed Ankara's sentiments that a political structure, including all ethnic and sectarian groups in Syria, should be established.

"The basic problem in Iraq and Syria is pushing a group or social segment out of the system. Those social segments are directed toward different structures to make themselves heard. This direction created ISIS-like organizations," Davutoğlu said, explaining the reason for the existence of ISIS and other terrorist organization in the region. He said that what matters is to form a political solution including all parts of society. Holding the Assad regime accountable for the ongoing crisis in Syria, Davutoğlu said that a political transition in Syria and the Middle East that is legitimate and makes the public safe is of the utmost importance for the region.

President Recep Tayyip Erdoğan also said that Turkey has been calling for a broader strategy to fight against the chaos in the region and that Ankara is trying to explain the necessity of a comprehensive strategy. He also remarked that if the U.S. is to adopt a different strategy, including the removal of the Assad regime, Turkey would welcome it.