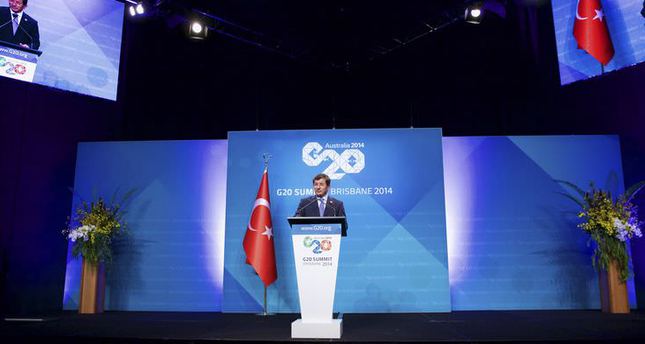 by AA
Nov 16, 2014 12:00 am
Turkish Prime Minister Ahmet Davutoğlu has outlined Turkey's 2015 G20 vision while expressing disappointment that talks at the weekend's G20 summit in Australia only superficially touched upon the recent refugee crisis coming from Syria.

Davutoğlu noted that, during its G20 presidency for the 2015 term, Ankara will work to make the concept of inclusive growth dominate G20 discussions.

"We will be monitoring closely the target of 2 percent collective growth in GDP," he said.

"Another area of priority for Turkey will be employment. Because of the recession starting from the 2008 global crisis, there has been a huge challenge: unemployment, not in the number but in the decrease of gains for workers," he said.

Turkey is set to take over the 2015 term of the G20 presidency on December 1.

The Turkish prime minister also briefed the G20 leaders by making a presentation on Turkey's priorities for the next presidency at a Sunday luncheon held for the G20 heads of governments.

In their meeting, the Turkish premier and Ban Ki-moon discussed issues relating to Syria and Cyprus, along with international counterterrorism efforts, according to the Turkish Prime Ministry.

Later, Davutoğlu departed Brisbane for the Philippines to pay an official visit to the Southeast Asian country on November 17 and 18.

"Unfortunately, the refugee issue has not been discussed in details," Davutoğlu told a Sunday afternoon press briefing following the two-day summit in host country Australia's eastern coastal city of Brisbane.

The Turkish premier stated that the refugee crisis in the Middle East was included only as a reference in passing in the final communique released by G20 leaders, following long negotiations by Turkey.

"We call on international financial institutions to assist affected countries in dealing with the economic impacts of this [Ebola] and other humanitarian crises, including in the Middle East," said the G20 Australia communique.

According to the Syrian Network for Human Rights, Turkey shelters the most Syrian refugees,1.9 million - including some 190,000 from the border town of Kobani, as well as 450,000 children and 270,000 women - out of the overall 5.8 million displaced by the almost four-year civil war.

"As G20 leaders, we have to see the connections between political and economic issues and should address all problems from a much more comprehensive and open-minded manner in the sense of understanding the sources of crises and to find ways out of these type of crises," he also said.