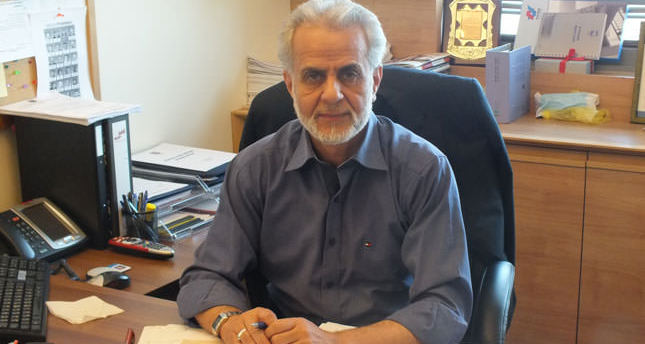 In an exclusive interview with Daily Sabah, Arab member of Knesset Ibrahim Sarsour, thanked Turkey for standing against Israeli aggression and slammed the Arab world, for ‘speaking a lot and doing nothing’ for the Palestinian cause. Sarsour also touched on the problems that Arab Muslims experience in Israel

Chairman of the United Arab List Party and member of the Israeli parliament Knesset Ibrahim Sarsour spoke to Daily Sabah about issues including Turkey's foreign policy and its stance toward the Palestinian cause, the Arab world's criticized position on war-stricken Gaza and the troubles the Arab community faces in Israel.

Daily Sabah: How would you evaluate Turkey's foreign policy toward the Palestinian cause?

Ibrahim Sarsour: As Palestinians, including those who live in the occupied Palestinian territories [in Israel] after the 1967 war, we are deeply and sincerely proud of Turkey's position concerning its policies related to the Palestinian issue, the Muslim world and its relations with rest of the world in the international arena. What's absent within the Arab and Muslim world is dignity, pride, real independence and a strong backbone with political, social or even ideological principles. So I think, Turkey with both its internal and foreign policies represent all those values while also representing the highest degree of democracy and Islam. This is the model we want to see in the Arab world. There is no doubt that Turkey represents Islamic democracy in the full meaning of these words. I hope the Arab world would imitate this, which is what I call a "transition from a dictatorship/totalitarian-regime to democracy as a whole," because we believe that the main obstacle the Arab world faces is development, prosperity and real independence, which can only be established with a real democracy. That's why Turkey represents this great value which we want the Arab and Muslim world to adopt.

The second point is that the foreign policy of Turkey, including the vision of its statesmen and ordinary people, wants to have good relations with the whole world but under one condition: That it respects everyone's values such as, human rights, peace in the Middle East and Palestinians' legitimate right to have an independent state side by side with Israel. So, we appreciate the Turkish position concerning these fundamental and basic issues related to us Palestinians and the Arab world.

DS: Turkey's current Prime Minister Ahmet Davuoğlu, who had served the country as foreign minister for five years, defines Turkey's foreign policy as "compassionate diplomacy." Turkey, which ranks as the third-largest international donor for humanitarian assistance, has introduced dozens of projects to rebuild war-torn Gaza. What would you say regarding Turkey's contribution to re-development of Gaza?

IS: There are no doubts concerning Turkey's huge assistance to the Palestinians of Gaza because in these dark days, when all Palestinians are facing fears and challenges in terms of the continuing occupation and blockade of Gaza, Palestinian authorities both in Ramallah and Gaza have decided to open up and develop reconciliation led by the formation of a unity government, which is strongly supported by Palestinians and Turkey. The agreement between Hamas and Fatah opened up the gates of a new era. As for the Turkish government, what I could say is, they don't only speak out but also act and do something. For instance, we just met the Turkish International Cooperation and Development Agency (TİKA) chairman Serdar Çam in Jerusalem who explained to us the projects they are implementing in Gaza, Jerusalem and the West Bank. And we represented some of the projects involving the indigenous Palestinian community of Israel.

I believe Turkey can play a very crucial role in promoting issues concerning Palestinians, and that the projects that Turkey is implementing on Palestinian land will really support Palestinian people to stand strong against Israeli occupation. In these terms, we see that Turkey is the only country that sincerely supports Palestine both politically and financially. Unfortunately, Arab countries and the international community are not doing anything regarding the occupation of Palestine, and Turkey is the sole country that takes the issue to the international arena, which bears enough power to be able to say stop to the Netanyahu government's efforts to swallow the home land of Palestinians and start a real peace negotiation process.

Ten Arab states came together in Cairo and promised to donate $5.5 billion in total to assist in the re-development of Gaza and reports say that two months after the end pf the latest war no payments have been made so far. The same states also pledged to donate $6.6 billion after the 2012 war but only ended up paying $600 million.

Yes, the Cairo summit promised to transfer $5.5 billion dollars to the Palestinian budget and Palestinian Prime Minister [Rami al-Hamdallah] said yesterday that no single piaster had been paid so far. So this is the gap between saying and doing things, unlike what Turkey does. Unfortunately, the Arab world is part of a very dirty play or game, which aims to crush Islamists within both Palestine and the Arab world. Thus, the Arab world will not move ahead without respecting its components, regardless of their ethnic, religious or ideological background.

DS: As a leader of the Arab Unity List Party – which fights for the rights of indigenous Palestinians in Israel and for an independent Palestine – what sort of challenges do you face in the Knesset?

IS: Before all, you must take into consideration that Israel was created on lands of Palestinian people. So, remnants of the Palestinian people, who were deported from their home land – the diaspora actually accounts for 60 percent of total Palestinians – live in other parts of the world as refugees. We, the indigenous community, who remained in the newly born state of Israel in 1948, had a population of 130,000 and now we make up around 20 percent of the Israeli population with 1.4 million. We are not a small minority and we are a different minority, as being indigenous gives us a unique minority position. However, unfortunately when Israel was created its foundation was based on Jewish identity. That's why all the values of this country contradict the moral values that Palestine seeks, including the right to exist, to have identity and civil and political rights. So the Arab-Israeli community challenges the difficulties imposed by Israel's regime, which is a certain type of apartheid. The only thing that could change this is the international implementation of policies to stop this apartheid, like what was done for South Africa. I don't mean using force or using weapons, but economic and political boycotts.

DS: What are the challenges that Palestinians in Israel face?

IS: We are deeply discriminated against in all fields of life, unlike Israelis who have the ability to enjoy our desired life. But the reality is completely different than their claims, in terms of land, construction, services and even religious rights. For instance, 95 percent of our Waqfs [inalienable religious endowments] have been confiscated by the Israeli authorities since 1962, as the Israeli parliament introduced a law called the "Absentee Law," which considers all Waqfs as the property of absentee Palestinians. They also completely ignore the definition of Waqf, which is by definition the property of God in Islam, and this property translates into billions of dollars for the Israeli budget. In terms of religious rights, we are deeply discriminated against and our mosques inside in Israel are humiliated. There are dozens of mosques in Haifa, Yafa, Safed, Ramla and even in Beer Shewa, many of them hundreds of years old; some are even 400 years old. And now in the 21st century – the century of human rights – these mosques are humiliated, neglected, isolated and some have even been turned into restaurants, night clubs, factories and barns for cows and sheep. This is the reality inside Israel, and with the very narrow margins of Israeli democracy we are trying to do something for our rights. As it's defined by the Jewish democratic state, it puts the Jewish majority on a higher level, which crushes minorities.

In one of our meetings, former Israeli Prime Minister Ehud Olmert very courageously said that the policy of discrimination against the Palestinian indigenous people of Israel is deeply rooted in the ideology of the state of Israel. It's built-in ideological discrimination; it's not something we can fix. The Israelis believe there is no way to guarantee safety as long as Arabs in Israel are totally weakened, which is totally wrong. Arabs will never submit themselves to such policies and we will go on struggling in a peaceful way. One day the miserable situation of the world will change completely and Israelis will face reality, which is why we always tell them to give us our rights and end the occupation of Palestine.

Knesset member Sheikh Ibrahim Sarsour, 55, is party chairman of the United Arab List, which has four members in the parliament. He majored in English literature at Bar-Ilan University and worked as a civil engineer. He lives in Kafr Kasim, where he has served as mayor, with his wife and son. He has headed the Islamic Movement's southern branch since 1998 and is a member of the Supreme Monitoring Committee of the Israeli Arab leadership. He is also the Deputy Chairman of the Al-Aqsa Association for the Protection of the Islamic Endowments (WAQF).