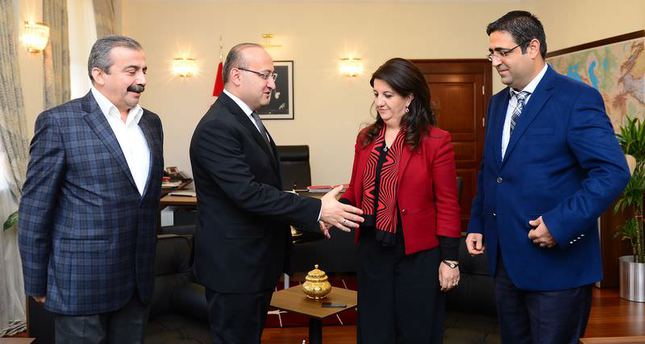 by Daily Sabah Nov 17, 2014 12:00 am
Deputy Prime Minister Yalçın Akdoğan and the People's Democratic Party (HDP) held an hour-long meeting on Monday to revive the reconciliation process initiative. The meeting came as the government prepares to proceed with the initiative, which was stalled by the Kobani protests in October, resulting in the deaths of over 30 people. The meeting was noted to have been fruitful, and will set the stage for a new phase of resolving the Kurdish issue.

Speaking at a press conference following the meeting, HDP deputies described the meeting as very productive as it allowed both sides to exchange ideas and pave the way for dialogue. "We have reached a consensus regarding the continuation of the process and have addressed those issues which were stalling the reconciliation process" said HDP's deputy chairman İdris Baluken. He stated that both sides have come to the conclusion that it is necessary to speed up the reconciliation process and ensure that it is conducted in a determined and more productive manner.

"We came to crucial conclusions about the rhetoric and policies which are used to speed up the reconciliation process" said Baluken, who stated that they will hold more meetings with government officials this week and discuss a number of issues in more detail.

Both the government and HDP have also exchanged ideas about visits to İmralı, which are made as part of the reconciliation process by a committee from the HDP. The HDP had previously requested to increase the number of delegates who visit PKK's imprisoned leader Abdullah Öcalan in İmralı Prison. "The visits will continue to proceed without interruptions" Baluken said, who noted that there is no schedule yet but both sides have agreed that the talks will continue and the government has not stated that they object to the extension of HDP's İmralı committee. HDP had previously requested the inclusion of Hatip Dicle and Ceylan Bağrıyanık in the committee.

With regards to the monitoring committee, HDP has outlined that they are on the same page as the government and they welcome the existence of such an objective committee to reaching a peaceful resolution.
The meeting took place at the office of the prime minister with the participation of HDP's deputy chairpersons including Pervin Buldan, Sırrı Süreyya Önder and İdris Baluken, shortly after the HDP expressed their willingness to resume the talks last week.

One of the main goals of the meeting was to take concrete steps towards issues which have been blocking the reconciliation process, and to clarify the schedule for visiting PKK's imprisoned leader Abdullah Öcalan in İmralı, according to Akdoğan. Accordingly, the meeting is expected to create confidence in the process, to avoid new crises in the future and to emphasize societal peace, consolidation and order.

Measures to encourage the disarmament of PKK militants are also on the government's agenda to speed up the process, while the PKK will be expected to abrogate its existence in Turkey and unconditionally withdraw all militants. Accordingly, the return and rehabilitation of militants will be conducted in stages. PKK militants who have not been involved in any crimes will return first, followed by others. The government will also bring a series of new regulations to encourage more militants to lay their arms down, while social integration projects will be carried out to rehabilitate the militants.

The Turkish government initiated the reconciliation process in early 2012 to end the thirty-year PKK conflict, and address the issues of the Kurds as part of the democratization package. Accordingly, a series of democratic reforms were carried out to empower minorities, including barriers to language being lifted, and many of the obstacles facing the Kurds being removed.

Prime Minister Ahmet Davutoğlu has constantly affirmed that the reconciliation process is a unique and local initiative which will reach the desired point if all sides fulfill their responsibilities.