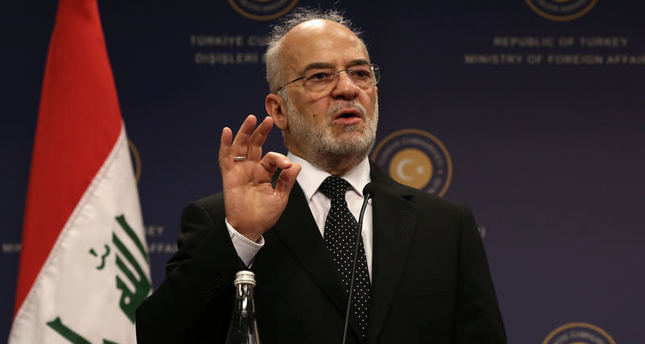 After his meeting with Davutoğlu, al-Jaafari had said that he had invited the prime minister to visit Iraq and said, "I appreciate his well-disposed attitude and courtesy. Hopefully, we are looking forward to see the esteemed prime minister in Iraq soon."

According to the diplomatic sources, Davutoğlu will have meetings with his Iraqi counterpart, Haider al-Abadi, on November 20 in Baghdad. On the following day, Davutoğlu will go to Irbil, the capital of the Kurdistan Regional Government (KRG). Bilateral relations between Turkey and Iraq were tense during the time of Abadi's predecessor, Nouri al-Maliki and his government. Nonetheless, Davutoğlu's Iraq visit is seen as a crucial point for gaining momentum in Turkish-Iraqi relations. In addition to regional and anti-terror issues, it is expected that Turkish and Iraqi officials are going to discuss ISIS and Iraqi refugees hosted by Turkey.

So far, Iraqi Foreign Minister al-Jaafari had praised Turkey's assistance in dealing with the aforementioned issues during his visit, and said, "We assessed strategic issues in addition to economic and political issues."

Furthermore, this visit matters remarkably in regards to the latest energy and budget deal between the Irbil and Baghdad governments. Last Thursday, both governments reached an agreement on oil and budget issues that had caused tensions between them. Turkey is among the countries that supports the unity of Iraq and tries to defuse the tension between the two counterparts.

According to the agreement, as a first step, Baghdad agreed to transfer $500 million to the KRG for November. In return, the KRG has agreed to allocate 150,000 barrels of oil per day for the Baghdad government.