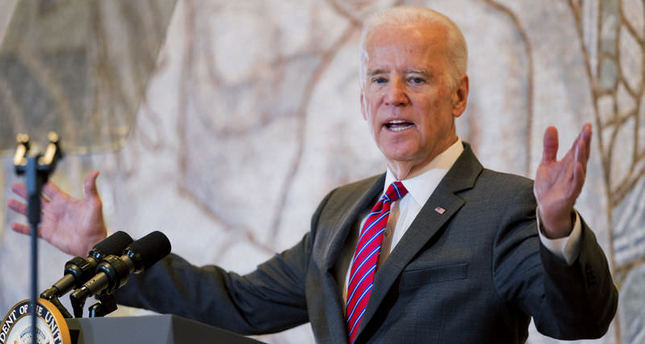 by daily sabah Nov 17, 2014 12:00 am
U.S. Vice President Joe Biden will visit Turkey this Friday as part of a trip including Morocco and Ukraine. During his two-day visit to Istanbul, Biden will meet with President Recep Tayyip Erdoğan, Prime Minister Ahmet Davutoğlu, Patriarch Bartholomew of Constantinople and a number of nongovernmental representatives. Biden will also deliver the closing speech of the Atlantic Council Energy and Economic Summit in Istanbul.

According to diplomatic sources, the U.S.-led coalition's fight against the Islamic State of Iraq and al-Sham (ISIS) and the latest development in Iraq will be on the top of Biden's agenda during his bilateral meetings with the Turkish leaders.

In October Biden apologized to Erdoğan for saying Erdoğan had conceded that his country mistakenly assisted foreign fighters, including ISIS while seeking to depose the Syrian regime. After Biden's call to Erdoğan, the White house said that Biden "apologized for any implication that Turkey or other allies and partners in the region had intentionally supplied or facilitated the growth of [ISIS] or other violent extremists in Syria." However, earlier this month Biden said that he never apologized to Turkey's president for claiming last month that the country's mistakes helped foreign fighters enter Syria, contradicting what the White House said about the incident.

As such, diplomatic circles consider Biden's visit an important sign to demonstrate that he and Erdoğan have overcome the apology issue and are working closely on common issues. Last weekend Davutoğlu discussed the crisis in Syria and Iraq with U.S. President Barack Obama during the G20 summit in Brisbane, Australia and it has been announced that the divergence between Turkey and the U.S. on how to tackle the war in Syria is getting narrower. Details of U.S aid to the Free Syrian Army will also be discussed during Biden's visit.