Davutoğlu reaffirms his faith in the reconciliation process 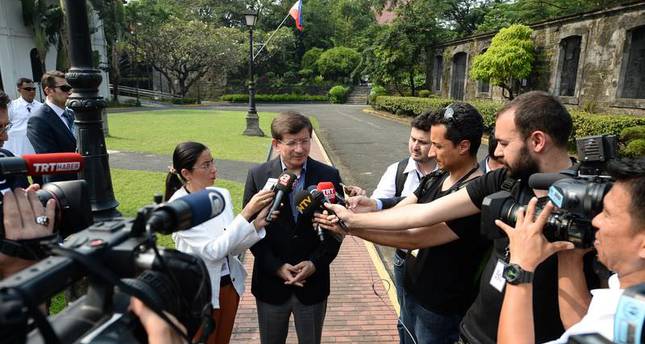 by daily sabah
Nov 18, 2014 12:00 am
Prime Minister Ahmet Davutoğlu has made a statement about the reconciliation meeting which took place on Monday between Deputy Prime Minister Yalçın Akdoğan and deputies from the People's Democratic Party (HDP). Speaking before leaving the Philippines, he called on everyone to stay optimistic about seeing positive changes in the near future to resolve the country's decades-long Kurdish issue.

"The government's position is clear" said Davutoğlu, who went on to emphasize the necessity of preserving public order, saying that creating unrest would only lead to chaos. He further warned everyone against the exploitation of Kurds through provocation to spoil the process. He noted the HDP has realized the importance of preserving public order and urged them to act in accordance with their statements.

Davutoğlu stated that he would give the necessary orders when he is back in Turkey and has been updated on the current state of events.

The prime minister is expected to visit Tunceli, Tatvan and Patnos over the weekend, and has stated that he will take the public's opinion into consideration and get insight about their expectations.