Turkey may face up to 3 million refugees if Aleppo falls, says foreign minister 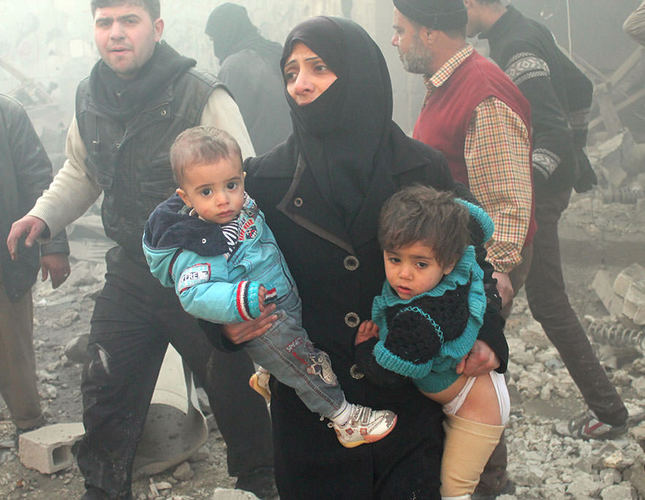 Foreign Minister Çavuşoğlu on Tuesday warned of a refugee influx of up to 3 million Syrian people in Turkey, if Aleppo falls into the hands of the Assad regime

Foreign Minister Mevlüt Çavuşoğlu said in a news conference on Tuesday that if Aleppo falls into the hands of the Assad regime, 2 million people or more may seek refuge in Turkey.

After Turkey opened its borders to war-torn Syrian refugees fleeing the violence in their homeland, which surfaced with the civil war in 2011 and continued apace with the rise of the self-proclaimed Islamic State of Iraq and al-Sham (ISIS) threat in the region, more than 1.5 million Syrians have found shelter in Turkey.

The foreign minister said in a press conference on Tuesday that both the ISIS advance and the Syrian regime must be stopped in Syria.

He said that the main group fighting against both ISIS and the regime is the Free Syrian Army (FSA), whose capabilities have been mitigated by their two-front battle.

"The weakening of the Free Syrian Army means the advance of ISIS and the regime and it makes Syria more destabilized," added Çavuşoğlu, highlighting that both the regime and ISIS should be halted.

The foreign minister said, "Civilians are fleeing where these groups [ISIS and Syrian regime] advance. A possible advance in Aleppo would mean 2-to-3 million Syrian people arriving at the Turkish border."

To get the refugee influx under control, Ankara has been pushing for a no-fly zone for refugees inside Syria near the Turkish border with the help of the international community, including the U.N. But the U.S., which is leading the anti-ISIS coalition, has some reservations over the establishment of the zone.

Regarding Turkey's ongoing no-fly zone demand, Çavuşoğlu said in a televised interview on Kanal 24 that Turkey and the U.S.'s differences on a no-fly zone in Syria is closing, even though the U.S. had some prior concerns.

The foreign minister said that there is no divergence between Turkey and the U.S. over the removal of the Assad regime, adding that there are differences in the steps to be taken.

According to some media outlets, U.S. President Barack Obama is seeking to change U.S. policy on Syria and asked his national security team for another review of their strategy in the region, as defeating ISIS in Iraq and Syria may not produce the expected results without a political transition in Syria, which requires the removal of the Assad regime. These allegations have been dismissed by U.S. Secretary of Defense Chuck Hagel, who said that there has been no change in the strategy for Syria.

Çavuşoğlu reiterated that Obama stressed the necessity of the removal of the Assad regime before and added, "A comprehensive, accurate and applicable plan is a must to reach a solution [in Syria]."

Highlighting that the U.S. has some problems with a military operation within Syria, Çavuşoğlu said, "We have said from the beginning that [using] only airstrikes will not be sufficient. The U.S. had some problems, but our position is now closer regarding the no-fly zone in Syria."

He added that there is no need for a U.N. Security Council decision to set up a no-fly zone.

Emphasizing that France and Turkey agreed over the no-fly zone, Çavuşoğlu said that the zone is needed in terms of humanitarian, military and strategic perspectives.