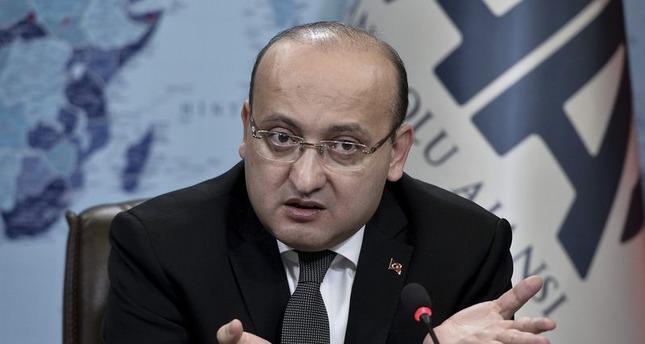 His comments came days after the main opposition Republican People's Party CHP submitted a report entitled "Freedom of Religion for All" to the Turkish Parliament in early November.

The report - allegedly based on the demands of the country's Alevi people - states "the place for religion on identity cards must be omitted, obligatory religion lessons must be abolished and legal religious rights should be granted, especially for Alevis".

Akdoğan told The Anadolu Agency at its headquarters in Ankara on Monday: "It is all about 'let's clear out all religion'. They think if they can present it as an initiative for Alevis, everything about religion can be abolished."

After Sunnis, Alevis constitute the second-largest religious community in Turkey.

Akdogan said people in the past could not even openly declare themselves to be Alevis in public in Turkey, let alone freely perform religious rituals.

He argued that, just like the type of prejudice which once existed towards the country's Kurds, the Alevi identity had long been denied, blocked, suppressed and humiliated under past governments.

Akdogan stated that Turkey had witnessed a substantial paradigm shift under the Justice and Development (AK) Party government, both on Kurdish and Alevi issues.

"A public awareness has been raised as they are now regarded as interlocutor in the eye of the state. The ignorant mentality of seeing them as a problem has changed," he said, pointing out that seven workshops on Alevi issues and four gatherings with Alevi people had been organized by AK Party governments.

The deputy PM further stated that the government had published classical Alevi books and appended about 100 pages on Alevism in text books used in religion courses at Turkish schools.

He said that, as part of a September 30 democratization package, the government had also changed the name of the Nevsehir University in central Turkey to Haci Bektas-i Veli University, naming it after a prominent religious figure of Alevi belief who lived and taught from 1209 to 1271 in Anatolia.

Akdogan also said he wanted the main opposition party to question their past stance towards Alevis, saying their previous governments were the ones responsible for the 1937 massacre of thousands of Alevi Kurds in Turkey's eastern Tunceli province - previously known once as Dersim before a state decree in 1935 changed its Kurdish name.

He said the opposition party CHP - the then-ruling party - was denying responsibility for Dersim massacre in which more than 14,000 civilians, including women and children, were killed in an operation by Turkish Armed Forces following an alleged riot in the city.

About 12,000 people were also driven out of their homes in a forced migration during the operation.

Akdogan stressed it was the AK Party government which had been the one to face and question the past and offer to take forward-looking steps.

Turkey's then-Prime Minister Recep Tayyip Erdogan said in November 2011: "If there is a need for the Turkish state to apologize (for the incident in Dersim), I will apologize and am apologizing."

"Was it our mentality which led to the massacres in Dersim and Madimak, and reject, ignore or suppress Alevism? No, it was not us," he said.

Following a report from the State Auditing Board (DDK) released in July, the Turkish Presidency declared as a massacre the 1993 Sivas incident known as Madimak, where 37 mostly Alevi artists and leftist intellectuals died when their hotel was deliberately set alight by protesters in Sivas province in central Anatolia.

The report found grave negligence on the part of the state in the handling of the July 1993 incident at the Madimak hotel in central Anatolia.