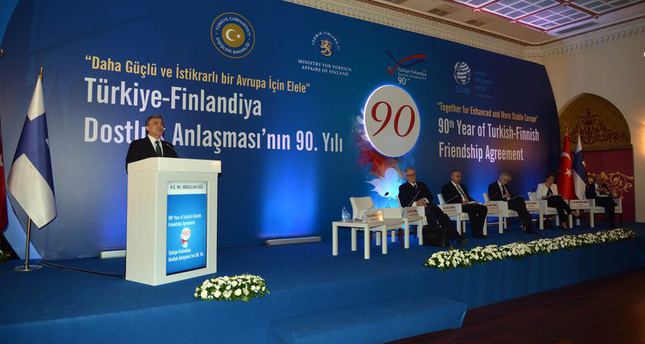 by daily sabah
Nov 19, 2014 12:00 am
The Former presidents of Turkey and Finland, Abdullah Gül and Martti Ahtisaari, met on Tuesday at a seminar organized to commemorate the 90th anniversary of Turkish-Finnish Friendship Agreement and have underlined the importance of Turkey's membership in the European Union while arguing that Turkey's accession will provide numerous benefits for the EU.

In the opening speech of the seminar, Turkey's 11th president Abdullah Gül stated that Turkey's EU membership will provide advantages for the union. "For Turkey, the EU is a delayed but authentic success story" said Gül, who claimed the EU is a borderless continent and that it is one of the most significant global projects. He added that the EU's economic alliance has transformed into a social and political alliance over the years.

Gül argued that the EU is currently facing a number of challenges to becoming a global power and declared that it is necessary for the union to re-evaluate its borders and accept new members in order to become a global power. He also argued that the EU's failure to include new members would lead it to lose its soft power and multifaceted structure, while he urged leaders to take effective measures against Islamophobia and Xenophobia in the EU, which pose a threat to millions of immigrants who live there.

Martti Ahtissari, the tenth President of Finland and a Nobel Peace Prize laureate agreed with Gül's statements and highlighted Turkey's importance for the EU. "Turkey belongs to Europe and Europe needs Turkey" said the former president, who stated he has always believed in Turkey's growth both in Europe and in Asia, while expressing the opinion that Turkey has a huge potential for both continents.

Ahtissari also drew attention to strong ties between Turkey and Finland and said the two countries are strategic partners, while noting that his government has strongly supported Turkey's accession to the EU.