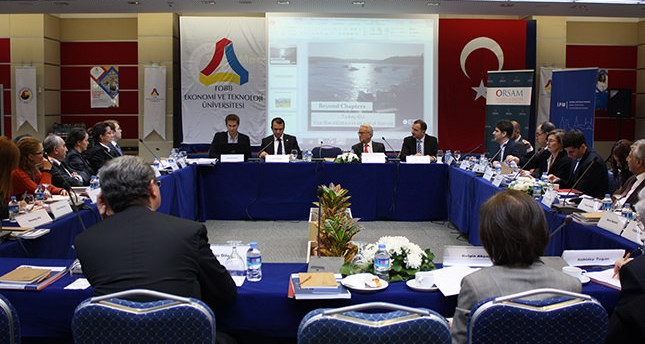 by daily sabah
Nov 19, 2014 12:00 am
A conference entitled 'Beyond Chapters: The Future of Turkey in Europe' took place on 18 November in Ankara. It was coordinated by the Center for Middle Eastern Strategic Studies (ORSAM), the Istanbul Policy Center, the European Union and Global Research Association (ABKAD) and the International Relations Department of TOBB University of Economics & Technology (ETÜ).

The aim of the panel was to discuss ways to overcome the current stalemate in Turkey-EU relations and to explore ways to tackle these challenges within and beyond Turkey's accession to the Union. The participants were Former Member of the European Parliament and Mercator-İPC Senior Fellow Hannes Swoboda, and Justice and Development Party (AK Party) Siirt Deputy, and co-Chair of Turkey-EU Joint Parliamentary Committee, Afif Demirkıran. The panel was moderated by ORSAM President, Associate Professor Şaban Kardaş.

Turkey is intensifying its efforts to revitalize the EU-Turkey relationship following Turkey's 2014 EU Progress report, which was published at the beginning of last October. In the week following that publication, Turkey's EU Minister and Chief Negotiator, Volkan Bozkır, announced Turkey's EU Communication Strategy, which is one of the three pillars of Turkey's New European Union Strategy that aims to eliminate obstacles to EU membership by accelerating the dynamics of EU-Turkey relations.

Regarding the potential for Turkey to be an energy partner of Europe, Hannes Swobada stressed the importance of negotiations being maintained within a formal framework, and underlined the possibility of a better future for both sides. "The European Union can live without Turkey and vice-versa. However, we can live better with each other" he said and likened the situation to a marriage between two sides.

Swoboda also pointed to the progress which has been taken in the Kurdish Reconciliation Process in the last few years and praised the current and previous government in Turkey for handling the problem. "20 years ago, there was not even a Kurdish issue because all of them were actually 'Turks' for the Turkish state" he said, expressing his pleasure at all the achievements which have been made. The former parliamentarian also indicated that the extremists in this issue should not be taken into account, since their interests are not with finding peace, but with maintaining the crisis.

Among the most critical chapters in the negotiation process are Chapter 23 on Judiciary and Fundamental Rights and Chapter 24 on Justice, Freedom and Security – these are still being politically blocked by the Greek Cypriot Administration, despite the EU Commission's and Parliament's call for opening them.

Speaking about the blockade issue, Afif Demirkıran stated that Turkey does not deserve such an attitude from EU countries, since Turkey has done its best to show its will to becoming a full member of the Union.

"Chapter 23 and 24 are so important for the negotiation process and we are open to discussing these issues, but the Greek Cypriot blockade does not allow talking, even within the official framework" he said.

Demirkıran also touched upon the historical process of Turkey's EU adventure, which started in 1963, and stated that, thus far, 2014 has proved that relations between both sides are about to gain a new momentum. ''The negotiation process has unfortunately been going on for 51 years now. During this time we've been a candidate country; we are determined, we have a target'' he said and underlined the fact that the end of the road is not about being a full member of the EU, but about attaining EU standards.

Turkey must comply with 35 "chapters" setting out reforms needed to become a member. So far in the negotiation process, 14 chapters have been opened out of 35 chapters and 17 of them remain blocked.