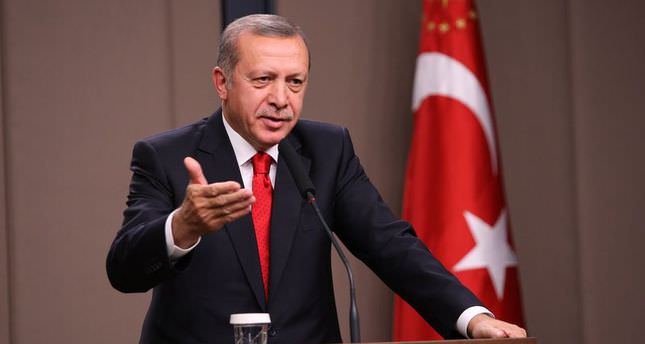 by AA
Nov 19, 2014 12:00 am
President Recep Tayyip Erdoğan spoke to the press prior to his visit to Algeria on Wednesday and stated that Turkey has established remarkable relations with Africa.

"The US-led coalition has not yet taken steps which Turkey has suggested for Syria" said Erdoğan in response to a question about the current situation of the training and equipment of coalition forces in Syria. He added that a no-fly safe zone should also be established in Iraq, as well as in Syria.

Algeria has welcomed "friendship and partnership" with Turkey, one day ahead of a scheduled visit by Turkish President Recep Tayyip Erdoğan to the North African country.

Erdoğan is due to arrive in Algeria on Wednesday for a two-day visit for talks with his Algerian counterpart Abdelaziz Bouteflika and senior officials.

In a Tuesday statement, the Algerian Presidency said that Erdoğan's visit "comes within the framework of [efforts to] bolster relations between the two countries, who are bound by a friendship and cooperation treaty signed in 2006."

Erdoğan's talks in Algeria are expected to focus on bilateral relations and issues of mutual concern.

The Turkish President will conclude his visit to Algeria on Thursday from where he will fly to Malabo, the capital of Equatorial Guinea, to attend the Turkey-Africa cooperation summit, which will open on November 19 and run until November 21.
Last Update: Nov 19, 2014 10:47 am