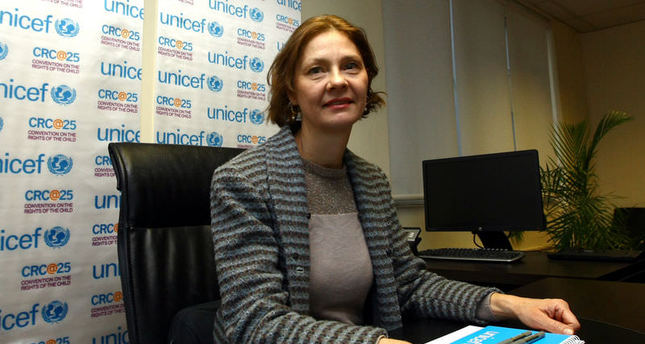 by Ali Ünal
Nov 19, 2014 12:00 am
The United Nations Children's Fund (UNICEF) marks the 25th anniversary on Thursday of the adoption of the U.N. Convention on the Rights of the Child, which has improved the lives of millions of children across the world by indicating worldwide commitment to protecting and pioneering children's rights. According to UNICEF Turkey Representative Lieke Van de Wiel, the convention is a guiding principle for UNICEF and everybody who is involved with children's rights. "Twenty-five years ago, the convention was an innovation in itself – there had been nothing for focusing on children and making sure that all children have rights everywhere. This was a quite significant step, especially for UNICEF. The reason why it provides us with such a moral guidance is that it was the quickest ever ratified convention and is endorsed around the world. It is still the convention with the most signatories in the world. It means this is a natural topic that everybody feels responsible for. Because of this, most countries have signed and ratified the convention," Van de Wiel remarked to Daily Sabah.

UNICEF is hosting a series of worldwide events to celebrate this significant milestone on children's rights to draw attention to the children who are still vulnerable and sidelined. Van de Wiel described the anniversary of the convention as a moment to reflect: "It is a moment to think better and differently, and say that all children have their rights everywhere. This particular year, besides all of this, is of course an anniversary of something that we did together. It has shaped the children's rights agenda. We look back and forward, and for us it is very good for continuing with the good work that we have always been doing."

Apart from the other series of the events, the project called Imagine: A Global Initiative is prominent. As part of the project, people from around the world will be able to download an application to their smart phones and sing John Lennon's iconic song "Imagine." The application will record every voice that sang and the main aim of the project is to reach 1 million different voices this year. According to Van de Wiel, the project is a nice way of connecting children around the world and the idea of the project is that children can actively contribute to something bigger than themselves. "If you read the convention, one of the progressive ways of participating, for children, is letting them make decisions about to their lives. Every voice will be added to the application and it will be the voice of the world's children for reimagining the future," she said.

Speaking about children's rights in Turkey, Van de Wiel underlined that the fulfilment of children's rights in Turkey has made tremendous progress: "Many more children in Turkey have seen their rights improved and basic services like maternal health, child health, education and nutritional issues have been tackled. With education, you can have children shape their thoughts and then participation comes into play. In Turkey, there is an increase in involvement and attendance of both boys and girls. Girls, of course, have to be caught up and they did very well, especially in the primary cycle."

Child marriages are also one of the major problems in Turkey. Van de Wiel believes that Turkey's track record with this problem is also promising. "Child marriage has lessened and it will certainly continue to do so. Despite the lack of data, we can say the awareness of this issue has increased. It is a problem that UNICEF looks at. We have to protect children from this phenomenon, even if it is quite reduced." She also said they are working closely with the Ministry of Labor about child labor issues, and in this field they focus on three sectors – services, agriculture and textile, which all still employ children as laborers.

"We are very happy to work with the Turkish government, other stakeholders and CEOs. You actually never stop working on child rights, there is always something needs to happen. The children's rights agenda is valid, even in the most prosperous countries. In Turkey, we have been very encouraged with the progress that has been made and the child rights issue has become more nuanced," Ms Van de Wiel concluded.