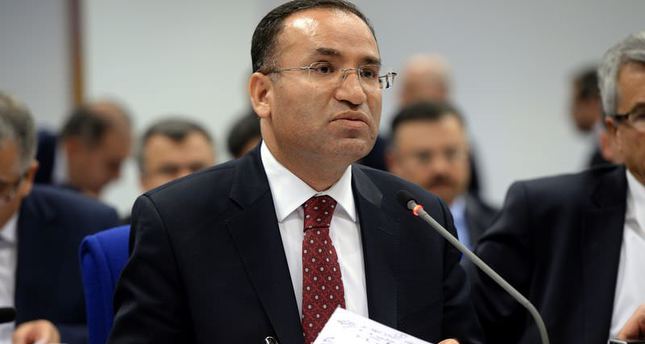 There are a total of 16 Islamic State of Iraq and al-Sham (ISIS) militants being held under arrest in Turkey, the Turkish Justice Minister Bekir Bozdağ announced on Wednesday. He went on to say that this information has only recently been given to him, and he does not know of the nationalities of the militants.

Bozdağ made this statement during the Justice Ministry's budget submission in the Parliament's Planning and Budget Commission on Wednesday.

Bozdağ also commented about the trial process of three ISIS militants who were involved in an attack in the central Anatolian province of Niğde on March 20. He said that the trial process is continuing and they are still being held in Ankara's F-type prison.

The three young assailants – who were said to have entered Turkey from Hatay province, which borders Syria – were reportedly heading for Istanbul when Turkish officers stopped them at a checkpoint in Niğde province. The assailants reportedly attacked the Turkish security force with AK-47 rifles, leading to the death of a policeman, a gendarmerie officer, and a truck driver, whose truck was hijacked by militants to flee the scene.

ISIS poses a serious threat to Turkey and has increased public concerns of late. Telephone hotlines and schemes to strip suspected militants of their passports are among the strategies being used to deter European fighters from joining the group.

Thousands of foreigners from more than 80 nations including Britain, other parts of Europe, China and the United States have already joined the ranks of ISIS and other radical groups in Syria and Iraq. Many made the crossing via Turkey, flying into Istanbul or its Mediterranean resorts on Western passports, undetected among the millions of tourists who arrive each month. More are trying to make the journey, despite tighter border controls.

Turkish authorities have drawn up a "no-entry" list of 6,000 people, some as young as 14, based largely on intelligence from Western agencies, and have deported more than 500 suspected seeking to join the extremists this year alone. "Our partners say we don't know who's going until after they've gone. So it's also about radicalization, about what happens before these people leave their homes," said a senior Turkish official, declining to be named so they could speak freely. "You can't catch the mice individually ... There are networks involved. We have to crush these networks."