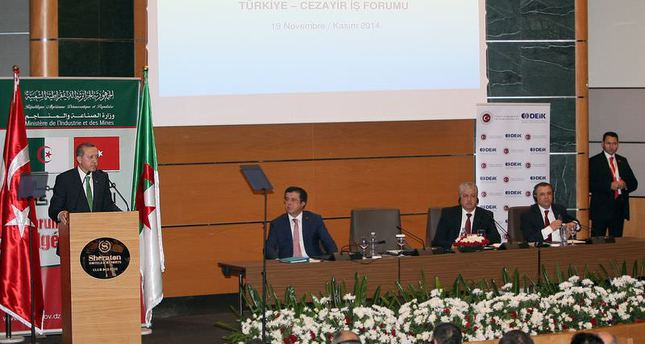 by daily sabah
Nov 20, 2014 12:00 am
President Recep Tayyip Erdoğan, speaking at the Turkish-Algerian Business Forum on Wednesday, condemned the Israeli raiding of Al-Aqsa Mosque and said that attacks on Al-Aqsa are directed at the entire global Islamic community because it belongs to all Muslims.

"The attack on Al-Aqsa Mosque could be considered as an attack against Turkey," Erdoğan said, also stating that Muslims cannot afford to turn a blind eye to the Palestinian issue. He noted that Al-Aqsa is one of the holiest places for all Muslims and the raiding of the mosque by Israeli forces is simply unacceptable.

Erdoğan also thanked Algerian President Abdelaziz Bouteflika for his invitation and said that their meetings had been very productive and they had had the opportunity to evaluate already improving relations between Turkey and Algeria over the years. Erdoğan also expressed Turkey's full support for the independence, security, stability and peace in Algeria, which he referred to as the "shining star of North Africa."

The two leaders have been discussing a number of regional issues including the territorial integrity of Iraq and the importance of strengthening the national consensus among Palestinians. Regarding the latter, Bouteflika announced that he will be hosting officials from Al-Fatah and Hamas in the upcoming weeks to boost unity among the two Palestinian factions. Both presidents also agreed that they are against any sort of foreign intervention in Libya.

Both Erdoğan and Bouteflika agreed that it is necessary to move bilateral relations between the two countries beyond economic relations and more toward strengthening cultural relations. The Algerian president said that Algeria would like to make use of Turkey's experience in the fields of education, health and construction, while he congratulated his Turkish counterpart for the successful management of the crises in Turkey.

Heavily armed Israeli security forces raided Al-Aqsa Mosque, regarded to be the third holiest site for Muslims, on November 5, after breaking into the mosque and shooting rubber bullets at Palestinian worshippers.