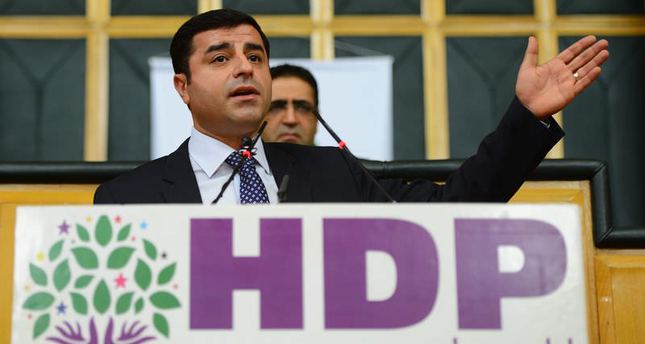 by daily sabah
Nov 20, 2014 12:00 am
Criticizing the PKK administration in the Qandil Mountains in Northern Iraq, People's Democratic Party (HDP) Co-Chair Selahattin Demirtaş said that remarks implying to cut off the reconciliation process do not put the government in a difficult position, but rather Abdullah Öcalan, the imprisoned leader of the outlawed PKK, which took up arms against the Turkish state to create an independent Kurdistan in the southeastern region of the country.

"All elements of the Kurdish movement should be careful about adopting a negative discourse," Demirtaş said, referring to the latest remarks coming from the PKK administration that claimed the reconciliation process died on the vine for the PKK.

The HDP called for a street protest in early October to support Kobani, while accusing the government of not doing enough to help the Syrian Kurdish fighters in the besieged town. These calls came under harsh criticism from Ankara and high senior officials urged HDP representatives to adopt a softer and more peaceful stance for the sake of the reconciliation process.

Negotiations with imprisoned PKK leader Abdullah Öcalan are expected to begin soon. Demirtaş said an extended committee is necessary for the negotiations to overcome the points both parties are having difficulty reaching a compromise and to inform the public of the course of reconciliation talks.