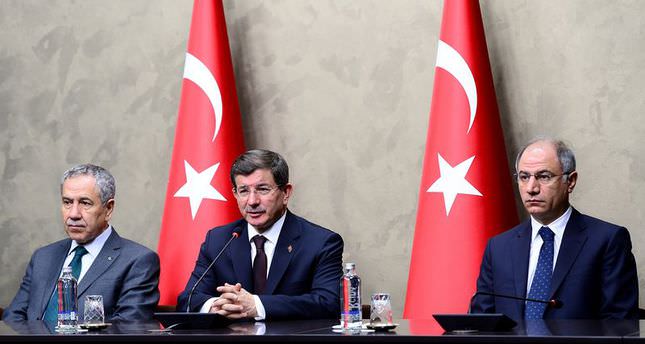 by AA
Nov 20, 2014 12:00 am
Turkish Prime Minister Ahmet Davutoğlu has committed Turkey to supporting the renewal of economic growth in Iraq.

"We hope Iraq will soon set free from the terror threat and will enable a solid domestic integrity to enable it to serve as a key factor in the process to build peace, both at home and in the region," Davutoğlu told a press conference early on Thursday at Ankara's Esenboğa Airport before he departed for Baghdad on a two-day official visit to the neighboring country.

Davutoğlu explained that Iraq has the capacity to become a rising economic power, not only in the region but also in the world by exploiting its rich natural resources for development, once it restores peace at home.

He maintained that Turkey can make contributions to Iraq's rebirth.

"We attach importance to opening new areas of cooperation with Iraq so as to make further use of the potential in transportation, energy, trade, agriculture and tourism," he said.

Davutoğlu said the mechanism created by the Turkey-Iraq High Level Strategic Cooperation Council, established in 2009, was disrupted because of the recent instability and violence in Iraq.

He added that Ankara has already agreed with Baghdad to accelerate the council's work, and he will also discuss cooperation in energy and trade along with possible joint anti-terrorism efforts during his talks in with Kurdish regional leaders in Erbil.

On Thursday and Friday, the Turkish premier will hold talks with Baghdad and Erbil officials on bilateral relations, on the continuing threat posed by the terrorist group, the self-proclaimed Islamic State of Iraq and Al-Sham (ISIS), and on energy issues.

Since mid-June, Iraq has been fighting to root out ISIS militants with its army and peshmerga forces from the Kurdish region. ISIS has taken control of large swathes of territory in Iraq and Syria, including some key oil fields in both countries.

The Turkish prime minister said that stability in Iraq matters not only for Turkey, but also for the whole region. Turkey will consult with the Iraqi government on the best means of restoring stability, and supporting the government in those efforts.

During his two day visit to the country, Davutoğlu is expected to have talks with Iraqi President Fouad Massoum, his aides, Prime Minister Haidar al-Abadi, and Iraqi Parliament Speaker Salim Jabouri, along with Turkmen deputies and other representatives of the Turkmen community in Baghdad.

The premier will then proceed to the Iraqi Kurdish capital Erbil to meet regional President Massoud Barzani and Prime Minister Nachirvan Barzani.