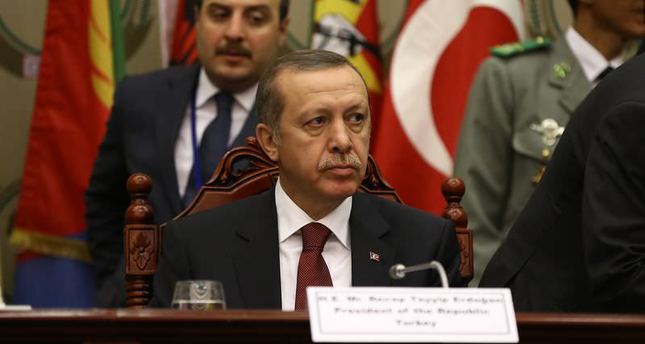 by daily sabah
Nov 21, 2014 12:00 am
President Recep Tayyip Erdoğan has warned member states of the African Union of the threats posed by the Gülen Movement and their activities on the continent. He gave the warning while attending the second Turkey-Africa Partnership Summit organized in Equatorial Guinea on Friday.

Erdoğan warned African states about the Gülen Movement by saying that it has hidden agendas. He argued that such organizations carry out a number of unlawful activities such as spying under the name of distributing humanitarian aid and providing education, and he called African states to pay special attention to this issue.

Erdoğan said that the partnership between Turkey and Africa will include battling against illegal organizations that have been involved across multiple sectors and try to infiltrate state institutions. "We expect that our friends in Africa are aware of this threat and I would like to stress that we are ready to share intelligence to tackle those organizations," Erdoğan said.

Erdoğan noted that Turkey's investments in the continent have reached $6 billion and announced that Turkey will provide an additional $5 million for the fight against Ebola in Africa. "We can see once again that cooperation in the health field is extremely important as these are tumultuous times because of the Ebola epidemic," the president said. Turkey's response was greeted by African leaders such as Mohamed Ould Abdel Aziz, the president of Mauritania. "Cooperation with Turkey in various areas will help us overcome the challenges Africa faces today," Abdel Aziz said.

Highlighting the importance of Turkey's stance on Africa, Erdoğan said that Turkey has never considered the continent as a land to exploit and has always seen it as a friend. "We have always approached Africa with humanitarian motives" he said, and that Turkey has always been proud of Africa's accomplishments.

He said that, in 2002, Turkey had 19 representative offices throughout Africa, whereas now it has 39 embassies and 10 consulates.

"Turkey has a versatile policy in Africa" Erdoğan said, declaring that Turkey is ready to take cooperation a step further in the energy and transportation sectors.

The second Turkey-Africa Partnership Summit, which took place in Malabo, the capital of Equatorial Guinea, was organized for regional leaders to talk about future plans and goals of Turkey and Africa.

The Gülen Movement is a transnational movement led by Fethullah Gülen who now resides in the U.S. in self-imposed exile. It is seen as a national threat to the state by the Turkish government as it is accused of wiretapping thousands of individuals including top level Turkish government officials and allegedly infiltrating state institutions to overthrow the government. Its schools and organizations operate in hundreds of countries and regions including the U.S., Europe and Africa.