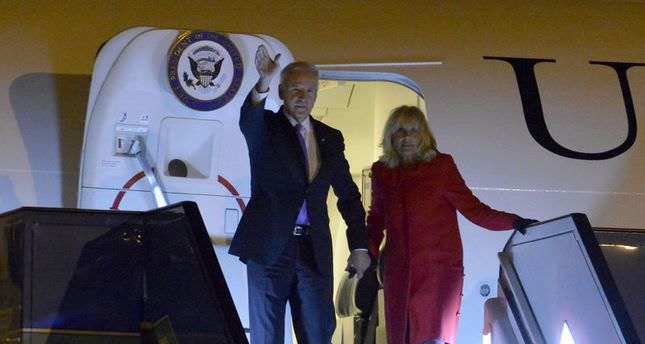 by daily sabah
Nov 22, 2014 12:00 am
As U.S. Vice President Joe Biden arrived in Istanbul on Friday, Ankara continued to reiterate its demands of an all-inclusive strategy, including the removal of the Bashar Assad regime along with fighting ISIS militants. After the Assad regime killed more than 300,000 of its own people and paved the way for militant extremist groups in the region, Turkey questioned why the U.S. is reluctant in adopting a comprehensive strategy to bring an end to the bloodshed in its southern neighbor.

Officials are reportedly going to discuss why the agreed military training of moderate Syrian opposition is still not on the agenda and Turkey will once again state that it could face a huge influx of refugees at any time if the U.S.-led anti-ISIS coalition do not immediately implement a safe zone and a no-fly-zone in Syria.

President Recep Tayyip Erdoğan has recently chided the U.S. for failing to meet Ankara's conditions for it to play a bigger role in the international anti-ISIS coalition in Syria. Speaking to reporters at Ankara's Esenboğa airport before departing for a trip to Africa, Erdoğan said the coalition "had not taken the steps we asked of them." Erdoğan said that the "parties have not taken any decisive steps toward the train-and-equip plan" for FSA fighters.

"From the no-fly zone to the safe zone, and training and equipping, all these steps have to be taken now. But the coalition forces haven't taken the steps we asked of them or suggested [alternatives] to them," he added.

In Istanbul, Biden was scheduled to have a dinner meeting with Prime Minister Ahmet Davutoğlu on Friday evening and on Saturday he will attend a panel held by the Atlantic Council and then meet with President Erdoğan to discuss cooperation in fighting ISIS.

Talks will center on "coping with the humanitarian crisis caused by the conflicts on Turkey's southern border," according to a statement from the White House, as well as "countering the threat posed by foreign fighters."

Erdoğan, however, signaled Ankara would not change its position unless its conditions were met. "Of course Turkey will maintain its stance until this process has been completed."

On Friday, Biden was in Ukraine where he said Russia must uphold its end of a truce in east Ukraine in order to resolve the conflict that has claimed at least 4,300 lives since March. Biden met with Ukrainian President Petro Poroshenko Friday, exactly one year after protests kicked off in November 2013 that would eventually help oust the country's pro-Russian ex-president from power. Biden said that Russia was violating a September cease-fire agreement meant to bring stability to east Ukraine, where pro-Russian rebels are fighting Kiev's troops. He warned that Russia, which has been hit with Western sanctions, could expect "rising costs and greater isolation" in response to its actions.