Former US ambassador to Turkey frustrated over distorted words 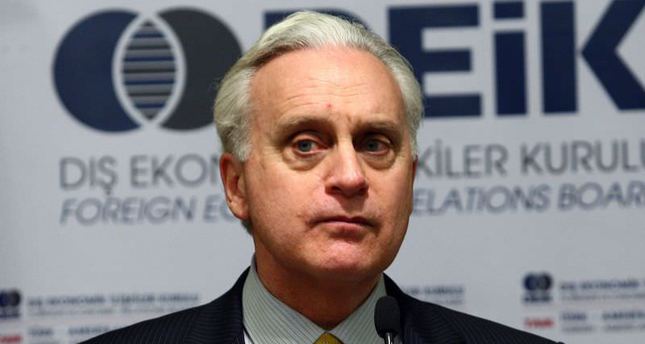 Francis Ricciardone was quoted by Hürriyet daily as saying ‘Stress at home, stress in the world’ to describe the current status of U.S.-Turkey relations. The former U.S. ambassador to Ankara told Daily Sabah that he was ‘misquoted’ and the article took his statements ‘totally out of context’

Former U.S. ambassador to Ankara, Francis Riccardone, expressed his frustration after a Turkish daily distorted his words and portrayed the current relations between the U.S. and Turkey as "strained."

Speaking on a panel titled Atatürk's Legacy in U.S.-Turkey Relations, organized with the attendance of Turkish diplomats in Washington, Ricciardone underscored the diversities between U.S.-Turkey relations using the words "stress at home, stress in the world" to describe the mutual relations, the daily claimed.

However, speaking to Daily Sabah, Ricciardone said his words were distorted and portrayed with a totally different meaning. "By misquoting me, the context makes it sound very different from what I said. The video of my talk is available on YouTube, in which I spoke for only three and a half minutes and you'll see it's complimentary," he said.

Reminding that he had served various jobs and lived in the region for the past 36 years, Ricciardone stated that what he said was that all the Turkish leaders he witnessed since 1979, "whether [late president Turgut] Özal, [former president Süleyman] Demirel, [late Prime Minister Bülent] Ecevit or current president [Recep Tayyip] Erdoğan" had all said Atatürk's famous saying.

"In Atatürk's time there was stress at home, stress in the world. In our times, there's stress at home, stress in the world. It's the same everywhere. This is what I said. So I was reassuring this group that Turkey, from what I hear, the current leadership is the same as the past, which is the policy of promoting regional peace and stability. If you read this article, you would think totally different," Ricciardone said.

Saying that he would not use such words for Turkey, former U.S. envoy added that, "This is the American friends of Turkey [present at the panel] in the Turkish Embassy with the Turkish Ambassador present; do you think I would insult Turkey?"

He added that Tanış also asked him a question saying, "Hasn't Syria poisoned relations of the U.S. with Turkey?" and stated that he refuted such a thesis, "which is directly contradictive."

When asked why the U.S. is so reluctant about Turkey's demands from the U.S.-led anti ISIS coalition; setting up a safe zone along its Syria border together with a no-fly-zone and train-and-equip option for moderate Syrian opposition, Ricciardone told Daily Sabah that he cannot talk on behalf of the U.S. government, but shared his personal opinions. "I think this is because we are a lot like Turks. Americans are reluctant in getting involved in wars and to get in tangled violent military operations. If we could do something against the cruelty of [ISIS] I think most Americans would want our government to do something; but I think it's not clear what could be done," he said adding that President Barack Obama has recently met with Prime Minister Ahmet Davutoğlu and Vice President Joe Biden is scheduled to meet with Erdoğan, where the allies had and will have the opportunity to discuss the regional issues in detail. Ricciardone also praised Turkey's humanitarian aid work and drew attention to almost 2 million refugees who fled the civil war in neighboring Syria and Iraq.