Biden holds talks with Patriarch Bartholomew before heading to Washington 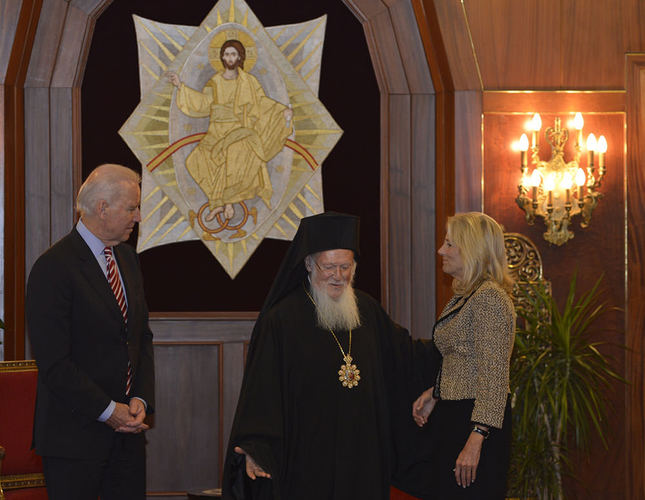 by daily sabah
Nov 23, 2014 12:00 am
U.S. Vice President Joe Biden met with Istanbul-based Ecumenical Patriarch Bartholomew of Constantinople, who is the spiritual leader of the Eastern Orthodox Church, ahead of his departure for Washington on Sunday. The closed-door meeting with Bartholomew lasted 40 minutes.

Following their visit to the Patriarch Bartholomew, Biden and his wife, Jill Biden, visited the Süleymaniye Mosque in Istanbul under extra security measures.

"Our relations with the U.S. are based on mutual trust and benefit and are stronger than ever," Erdoğan said.

"We discussed with President Erdoğan what the coalition can do to defeat ISIS [the Islamic State of Iraq and al-Sham], and we need Turkey's support. I think Turkey believes that they need us as well," Biden said.

Biden also announced that the U.S. will provide $135 million in humanitarian aid to help civilians affected by the Syrian civil war. The new funding will be provided to people inside Syria and Syrian refugees in Turkey and neighboring countries.

Referring to the Cyprus issue, Biden said that if there is political will, there is a potential for a solution that would be beneficial for both Cypriots and people in the wider region.

He called on both sides to return to the negotiating table.

During the meeting, the two leaders focused on cooperation in fighting ISIS in Syria and Iraq as well as coping with the humanitarian crisis caused by the conflicts on the other side of Turkey's southern border.

It is Biden's first visit to Turkey since he criticized the country for inaction against ISIS in a speech at Harvard University on Oct. 2.

His comments angered Erdoğan, who said at the time, "Biden has to apologize for his statements" or become "history to me."

On Oct. 4, the White House released a statement that said: "The vice president apologized for any implication that Turkey or other allies and partners in the region had intentionally supplied or facilitated the growth of ISIS or other violent extremists in Syria."