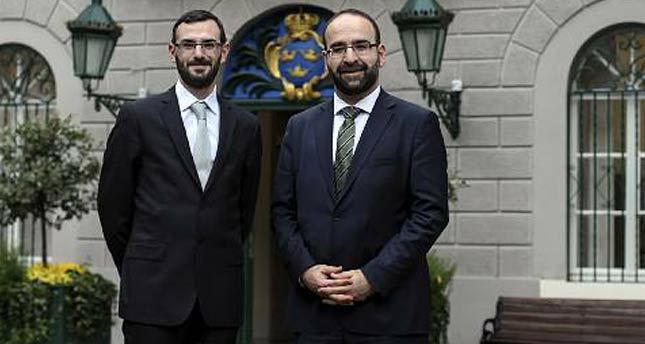 by daily sabah Nov 24, 2014 12:00 am
Mehmet Kaplan, a Swedish parliamentarian of Turkish origin, has stated that the recognition of Palestine as a state had to be achieved in order to prove the government is on the side of peace.

"The stance of our party is clear. We have always been in favor of peace. You have to be clear in your approach towards the issue between Palestine and Israel to prove you are for peace. For us, there are two equal states. And that has been our approach since our party was established." Kaplan said.

Kaplan is Sweden's Minister of Housing and Urban Development, aligned with the Swedish Green Party. Speaking to Samed Karagöz from Akşam Daily, Kaplan talked about the process of Sweden's official recognition of Palestine as a state.

After taking office on October 3, Swedish Prime Minister Stefan Lofven announced that the new center-left government intends to give de-facto recognition to Palestinian statehood. The move is significant since it marked Sweden as the first European Union member to recognize Palestine as a state, in an attempt to pressure Israel on establishing a two-state solution negotiated in accordance with international law.

"One of the reasons behind my entrance to my current party was the stance of it towards Palestine and Israel issue. The European Union has been closely monitoring the recognition of Palestine since 2009 and it has made a decision to officially accept it as a state when the time comes." Kaplan was quoted as saying.

He also stated that it was time the government took a step towards this recognition after establishing the cabinet. He also noted that the opposition was in support of the move as well.

He said his interest in the issue began during a visit he had paid to Palestine and Israel. Witnessing how the Palestinians were exposed to pressure by Israel, he said he became concerned about the matter.

Kaplan was also on board the ship to Gaza which was carrying supplies to be sent through the Israeli embargo of the Gaza strip. The Israeli armed forces boarded the ship on 31 May 2010 and the subsequent clash killed nine flotilla members.

Remembering the days when he witnessed the incident, Kaplan said that the Israelis had ransacked all the supplies gathered by Swedish community in the face of whole world.

"It is necessary to recognize Palestine. And we did follow that necessity." Kaplan said, concluding his speech.

Despite many EU member states voicing their support for Palestinian statehood, the EU has not yet given official recognition to Palestine. The United Nations' vote in 2012 gave Palestine a non-Member Observer State status. More than 130 countries already recognize Palestine as a state including Hungary, Poland and Slovakia; however they did so before joining the European Union.