Turkey and US have overlapping policies, says FM Çavuşoğlu 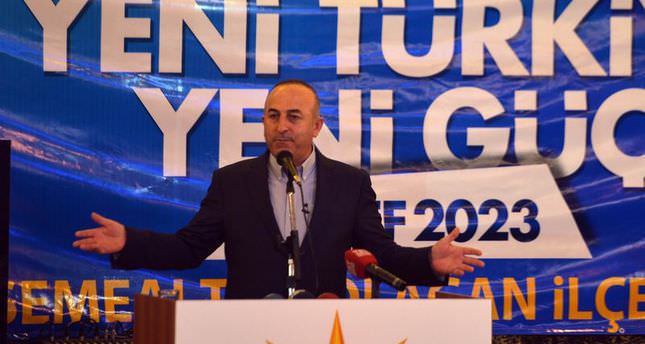 by AA Nov 24, 2014 12:00 am
Turkey's Foreign Minister Mevlut Çavuşoğlu said on Sunday that Turkey can differ with the U.S. on "some issues" from time to time.

He made his comments during a rural party gathering in the southern province of Antalya.

"Turkey and the U.S. can sometimes differ on certain issues because we have our own interests; but in general, the two countries have overlapping polices, that is why we are allies," he said.

Last Saturday, Turkish President Recep Tayyip Erdoğan held a press conference with U.S. Vice President Joe Biden. Erdogan said that Turkey is determined to strengthen its cooperation with the U.S. against ISIS in order to maintain regional peace and security.

Çavuşoğlu also talked about the solution process which the government launched last year.

It aims to secure an end to the decades-long conflict with the outlawed PKK.

He slammed the country's opposition parties - including the Republican People's Party, National Movement Party and the Peoples' Democratic Party --for encouraging people to take to the streets.

He was referring to a call made last month by the pro-Kurdish Peoples' Democratic Party for protests in solidarity with the ISIS-besieged Syrian town of Kobani, which is largely populated by Kurds.

The call was followed by a week of violence that left at least 38 civilians and two police officers dead, along with scores of damaged vehicles, state buildings, political party offices and shops.

"We will take necessary precautions for our country's safety, and at the same time, we will not give any concessions to those who are trying to block the process," he said. "We want peace, brotherhood, democracy and development."

Cavusoglu also commented on the newly built presidential palace in Ankara by saying "the palace is not owned by president Erdoğan's father," but rather, by all the Turkish people.

Several lawsuits against the construction of the palace have been filed.

One of these lawsuits was filed by a group from the Union of Chambers of Turkish Architects and Engineers.

Their brief included the claim that the palace was built unlawfully on a protected nature site.

The Turkish presidency denied these allegations ten days ago.

Deputy Secretary General of the Presidency, Metin Kıratlı, said they have a construction permit and also an occupancy permit dated Oct. 8, 2014.

"The allegations come from those who are jealous and do not want Turkey to become stronger," he said. "A lot of institutions in Turkey have renewed their buildings and we are undergoing a change, with freshly built roadways and faster train tracks."