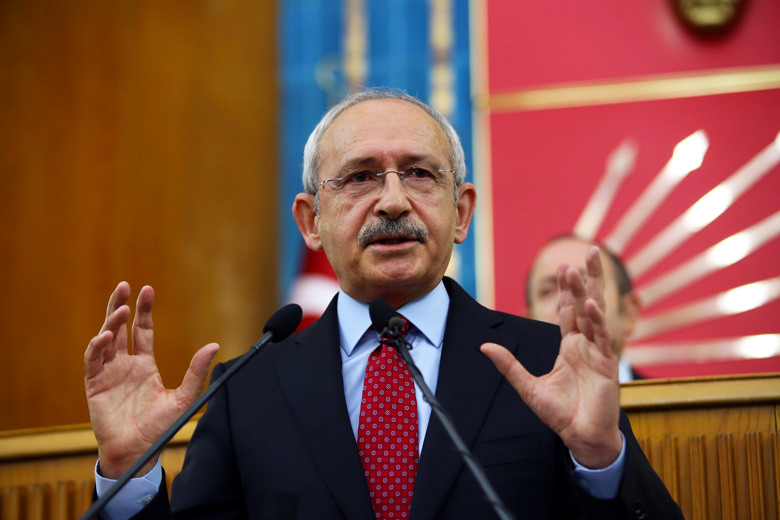 by daily sabah
Nov 25, 2014 12:00 am
The main opposition Republican People's Party (CHP) leader, Kemal Kılıçdaroğlu, addressed party members in the CHP's Antalya provincial meeting on Monday, saying that party administration members who do not believe in the CHP's ability to come to power should leave the party.

The internal dispute within the main opposition, which started with the resignation of renowned neo-nationalist Ankara Deputy Emine Ülker Tarhan, does not appear to be any closer to reaching a conclusion. While some CHP dissidents called for Kılıçdaroğlu to resign, Kılıçdaroğlu gave an ultimatum to party members to decrease the tension within the party.

On Monday, Ülker, who formed her own party, the Anadolu Party, following her resignation, targeted Kılıçdaroğlu. "The CHP's division comes into question; everyone knows who is responsible for it. [Everyone knows] which decision, which alienating attitudes, which discipline threats, which double standards, which wrong calculations [are responsible for it]," said Tarhan, slamming CHP leader Kılıçdaroğlu.

Tarhan came under harsh criticism from some CHP members who asserted that she divided the votes of the CHP with her resignation. Refuting the criticism, Tarhan said, "If I am influential enough to divide the CHP in the eye of public, does the CHP notice it now?"

In the August 10 presidential election, Tarhan's name was allegedly among those who would be mentioned for the presidential candidacy, but the claims were dismissed by both her and the CHP. Following the CHP's loss in the presidential election, the 18th extraordinary party congress was held to elect a party leader in response to harsh criticism and intra-party opposition within the CHP. It was also asserted that Tarhan would announce her candidacy for the party leadership to compete with current chairman, Kemal Kılıçdaroğlu, but these allegations were dismissed when CHP Vice Chairman Muharrem İnce announced his candidacy to run in opposition first.

The party has been facing disintegration of late as dissenting voices being raised among party members have been getting louder. The party administration was first criticized by Ince following the August 10 presidential election that resulted in disappointment for the party. The local elections on March 30 were likewise a failure for the CHP. Two subsequent stories of failure led party members to question the leader's incapability of establishing the right kinds of policy to reach success.

Tarhan, before submitting her resignation from the party, blamed the CHP's administration for their "wrong and weak policies," which she claims are not representative of the people's sentiments and were not made with winning the elections in mind.

Following Tarhan's resignation, Eskişehir Deputy Süheyl Batum asserted that there are 20 more deputies within the CHP who stand against the current policies of the party.

The latest in a series of dissenting voices within the CHP has come from İzmir deputy Birgül Ayman Güler, as she recently made a call on the Central Executive Board (MYK) members and its leader Kılıçdaroğlu to step down.