Deputy PM urges HDP to be more responsible in reconciliation 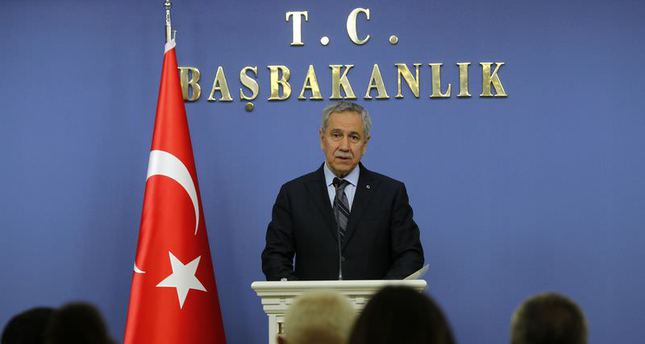 by daily sabah
Nov 25, 2014 12:00 am
Deputy Prime Minister and Justice and Development Party (AK Party) spokesman Bülent Arınç urged the Peoples' Democratic Party (HDP) to act more carefully and responsibly with regard to the reconciliation process between Ankara and Kurds, which began to end the 30-year conflict between the PKK and the Turkish state.

"The HDP carries out an important duty. It is necessary for them to be more responsible and more honest in their relations with the government as a political party," Arınç said, noting that the HDP is the medium between imprisoned PKK leader Abdullah Öcalan and other factions in the reconciliation process.

The reconciliation talks have seen a stall in recent times following the October 6-7 Kobani demonstrations that morphed into violent clashes between pro- and anti-PKK groups in eastern Turkish cities. Even though the reconciliation process road map was ready ahead of the incidents and it was expected that in four or five months the Kurdish issue would successfully come to an end, the demonstrations harmed the government's trust in the HDP and other parties included in the protests.

The HDP called for a street protest in early October to support Kobani while accusing the government of not doing enough to help the Syrian Kurdish fighters in the besieged town. The call came under harsh criticism from Ankara and high senior officials urged HDP representatives to adopt a softer and more peaceful stance for the sake of the reconciliation process.

Arınç said some Kurdish politicians such as Leyla Zana, Hatip Dicle and Ahmet Türk have acknowledged that failing to successfully end the reconciliation process would be a disaster for Turkey and that there are some factions that try to undermine the process.

Bringing up HDP Co-Chair Selahattin Demirtaş's call for street protest, Arınç said that during the August 10 presidential election, Demirtaş competed with other presidential candidates and had a more embracing and compromising discourse.

"[Demirtaş] garnered 9.8 percent of the vote, this is a political success. If [the HDP] maintains the same attitude, they might pass the 10 percent quota," Arınç said, asserting that the HDP's compromising stance was only for the presidential election and they turned back with the October 6-7 demonstrations.

Regarding a secretariat to be established to hold meetings with state officials and politicians as part of reconciliation negotiations, Arınç said that a secretariat is a reasonable demand and added, "This demand needs to be met if you give importance to an individual being in prison for 15 years [Öcalan] within the scope of the reconciliation process."

He added that the scope of the secretariat is yet to be definite.

Echoing Prime Minister Ahmet Davutoğlu's remarks that public order comes first in reference to the Kobani protests, Arınç said that the entire nation's security is under the government's responsibility and Ankara does not allow certain circles to harm the process or to disturb public order.
Ankara continuously reiterated that public order and the reconciliation process are not alternatives to each other since the beginning of the stall in the reconciliation process.