Pope refuses to use armored vehicle during Turkey trip 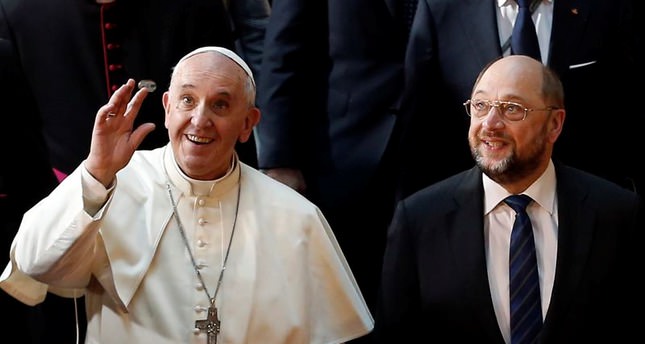 The Pope usually chooses to use normal cars rather than bulletproof Popemobiles during his trips to allow him to be as close as possible to the people.

Pope Francis's historical visit on November 28 will last three days with many stops for meetings with Turkey's top officials and religious authorities.

The pope's itinerary begins with a visit to Anıtkabir, the mausoleum of Mustafa Kemal Atatürk, in the Turkish capital Ankara. He will later have a meeting with Erdoğan and meet with Turkish Prime Minister Ahmet Davutoğlu. Mehmet Görmez, the head of the Directorate of Religious Affairs, is also among those whom Pope Francis will meet.

After the first day of the trip, Pope Francis will hold a service in the Cathedral of the Holy Spirit and participate in a religious rite at the Greek Orthodox Church of St. George in Fener and hold a private meeting with Patriarch Bartholomew.

This will be the fourth time that Catholicism's highest religious authority will visit Turkey after Paul VI, John Paul II and Benedict XVI.
Last Update: Nov 26, 2014 9:39 am