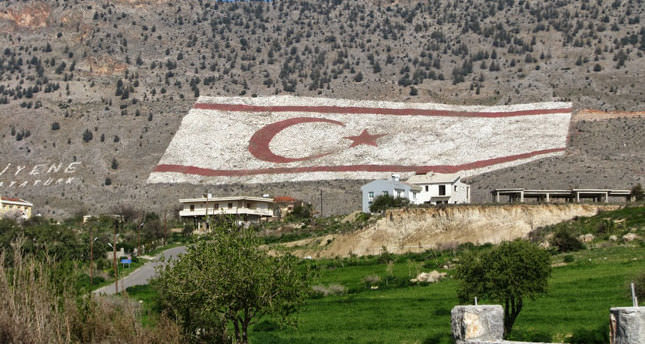 by daily sabah
Nov 25, 2014 12:00 am
While the U.N. and U.S. are increasing pressure on Greek Cyprus to come back to the table after they announced the suspension of negotiations on reunification with Turkish Cyprus on Oct. 6 in protest over the presence of Turkish naval vessels in its exclusive economic zone, the latest signals coming from the south side of the island indicate that Greek Cyprus will continue its uncompromising attitude and it seems like re-launching the peace talks is a remote possibility unless they change their position in the coming days.

U.S. Vice President Joe Biden, who a paid historic visit to the divided island last May, tried to bring the Greek and Turkish Cypriots back to the table to find a solution to the long-standing dispute. The prospects for the resumption of the stalled peace talks on Cyprus and the issue of energy security were among the matters discussed Biden and Turkish government officials during his visit to Istanbul last weekend. Biden met President Recep Tayyip Erdoğan and Prime Minister Ahmet Davutoğlu to discuss the developments on Cyprus. Just after his meeting with Biden, Erdoğan met Turkish Cypriot president, Derviş Eroğlu, and evaluated the latest developments. Meanwhile, Biden called Greek Cypriot President Nicos Anastasiades, and updated him about his recent conversations with Turkish leaders. According to the transcript published by the White House, Biden emphasized the need to de-escalate tensions in order to get back to a more constructive track in the U.N.-mediated settlement talks on Cyprus and reinvigorate efforts to seek mutually beneficial solutions. "Both leaders emphasized their commitment in reunifying the island as a bi-zonal, bi-communal federation," the transcript read.

In the meantime, U.N. Secretary-General Ban Ki-moon's special adviser for Cyprus, Espen Barth Eide, started his visit to Cyprus on Monday. He will meet with Anastasiades today and Cypriot Eroğlu on Wednesday morning. According to sources on the island, Espen will propose resuming the U.N.-led talks, and will suggest a twin-track process parallel to the peace negotiations as well as set up an advisory panel to deal with technical aspects of managing natural gas and energy on a reunified island.

After these meetings, Eide expects to get an official response to his proposal with regard to the management of the issue of hydrocarbons. However, U.N. spokesman on Cyprus, Michel Bonnardeaux, told the Cyprus News Agency on Monday that the Greek Cypriot side has already rejected the proposal. "It's been rejected publicly, but nobody sat down and explained to him, so I think he'll be looking for that," Bonnardeaux added.

Days after Greek Cyprus left the negotiating table in September, Eroğlu sent a letter to U.N. Secretary-General Ban Ki-moon calling for the resumption of negotiations. Likewise, Espen said in early November that they are working hard to see how they can develop conditions for going back to the table. However, Greek Cyprus's rejection to the new U.N. proposal is blocking prospects for the restarting peace talks.