Turkey will not give up rights in Mediterranean Sea: PM Davutoğlu 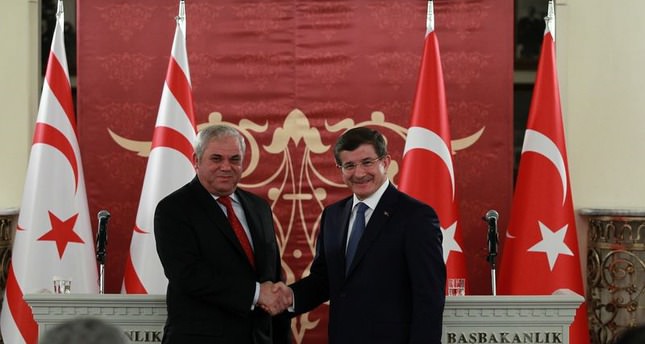 by Daily Sabah with AA Nov 25, 2014 12:00 am
"Turkey and the Turkish Republic of Northern Cyprus cannot be excluded from the East Mediterranean, we have rights on the natural resources of Cyprus, and we will not give up those rights," said Turkish Prime Minister Ahmet Davutoğlu on Tuesday.

Speaking at a joint news conference with Northern Cypriot PM Özkan Yorgancıoğlu, Davutoğlu said, "While Greek Cypriot is procrastinating in the peace talks to gain time, with excuses like its economic crisis or Turkey's seismic exploration activities, we insist that the island's natural resources should be exploited in a fair manner under a united Cyprus."

Davutoğlu stated that Turkey told Greek Cypriots that cooperation over Cyprus' natural resources can elevate relations between both sides, and the dispute can be transformed into a peace agreement.

"Greek Cyprus turned down our cooperation attempts and pursued one-sided agreements with regional countries over the island's natural gas," he added.

The Greek-Cypriot administration suspended the most recent talks with the Turkish Republic of Northern Cyprus over the island's future on October 7 after Turkey sent an oil and gas research vessel on a mission off the Cyprus coast.

The move to send a research vessel, with two navy ships, was intended to show that Turkey objected to the Greek Cypriot administration's plans to unilaterally exploit hydrocarbon resources off the island. Both Turkey and the Turkish Republic of Northern Cyprus have called for a fair division of such resources between both sides.

The Turkish Republic of Northern Cyprus was also not included in a meeting of Egypt, Greece and the Greek Cypriot administration in Cairo last week, in which a natural gas strategy for the Eastern Mediterranean region was discussed. A statement after the three-way meeting called on Turkey to "cease its operations within the maritime boundaries of Cyprus."