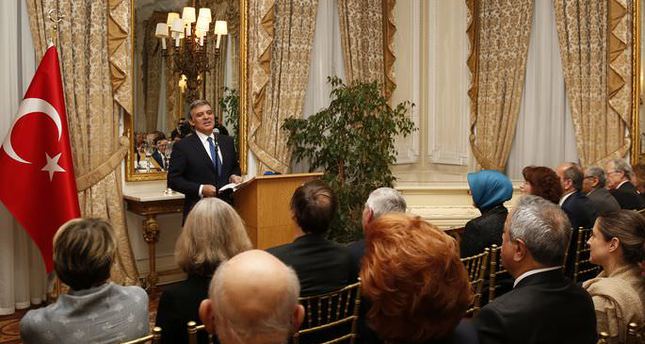 by Büşra Akın Dinçer
Nov 26, 2014 12:00 am
Abdullah Gül, former president of Turkey, attended an hour-long discussion at Chatham House moderated by the director of the institute, Dr. Robin Niblett. Gül spoke about developments in the region, especially the emergence of the threat posed by the Islamic State of Iraq and al-Sham (ISIS).

Gül described ISIS as a political movement as opposed to a religious one:

"ISIS was not taken seriously back in 2006. It was just emerging back then, shooting videos describing the borders of the country they wanted to establish. However, it was not taken seriously. If they did not monstrously kill American and European journalists in front of the whole world, maybe they would not be taken seriously today. Who can accept the current picture? Who can accept to live under oppression? ISIS successfully took advantage of sensitive issues in the region. Even though they call themselves the Islamic State or caliphate, or they use Islamic terminology, no Muslim country could be fond of them. On the contrary, the religious hate ISIS because they give a bad image to Islam. ISIS is a political movement. If we see it as a religious one, we are mistaken. "

He also criticized the problem of ISIS being perceived as only Turkey's problem:

"I do not see ISIS as only Turkey's problem. I also do not see it as a problem between Turkey and Syria. ISIS is a problem for the entire region and humanity. Since Turkey is a neighboring country, it is more involved than any other without a choice."

Gül underlined the gravity of the influx of refugees to Turkey. He said that Turkey was following a humanitarian foreign policy and emphasized the reluctance of Western countries to address the refugee problem:

"Germany has received the most refugees among all European countries. Even in that case, Germany has received 2 million refugees in 20 years. Turkey has received the same number of refugees in only two years. Turkey is going through a huge test. We could close our borders and all those people would stay there. That would lead to bigger tragedies. We took the situation as a test of our humanity. We saw it as a duty of one neighbor to another. We are proud of it. However, there should be an effort to take the burden off Turkey's shoulders. According to the latest numbers, Turkey has spent $4 billion on refugees. The largest financial help came from Saudi Araba, and it was only $100 million. When it comes to European countries, some gave $2 million, others gave $3 million, and if you put them all together maybe it makes another $100 million. There should be [more] financial support."

Gül also emphasized the importance of the latest developments in the north of Turkey. In response to a question, he pointed out the seriousness of the growing tension between Europe and Russia:

"The developments in Ukraine matter to all of us. The problem between Ukraine and Russia is a deep one in Europe and the most serious one NATO faces. The situation doesn't only matter to Russia or Ukraine, but builds tension in the entire region. Especially the annexation of Crimea by Russia and acceptance of the situation by all countries created tension. Unfortunately, we are at the beginning of a [new] Cold War era. We hope it doesn't go any further."

Gül was the recipient of the Chatham House Prize in 2010.