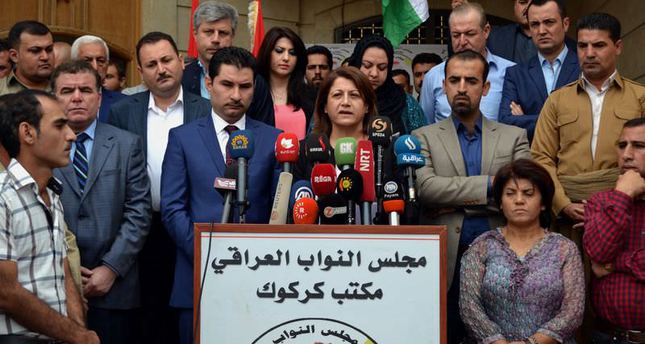 by AA
Nov 26, 2014 12:00 am
The Turkish prime minister's first visit to Baghdad was significant in terms of de-escalating tension, reviewing previous agreements and cooperating in combatting terrorism, a Kurdish deputy said on Wednesday.

The prime minister Ahmet Davutoğlu paid a two-day official visit to Baghdad and to the KRG at Irbil from November 20-21.

In Irbil, he met with his Iraqi counterpart Haidar al-Abadi and Masoud Barzani, the regional government's president.

Many issues, including previous cooperation agreements and intelligence colloboration on fighting the self-proclaimed Islamic State of Iraq and Sham (ISIS) were discussed during Davutoğlu's visit, said Ala Talabani, a member of the Iraqi parliament from the Patriotic Union of Kurdistan in an interview with The Anadolu Agency.

The visit, which also brought a large official delegation, was an indication of the interest and importance attributed by Turkey to Iraq, Talabani said.

The lawmaker said that there had been 48 memoranda of understanding, which were signed in 2009 by then Prime Minister Recep Tayyip Erdoğan and then-Iraqi Prime Minister Nouri al-Maliki. She did not provide details of the agreements.

The Kurdish minister hailed Turkey's investments and projects in the regional government.

She also said Nechirvan Barzani, the prime minister of the Kurdish Regional Government, would pay a visit to Turkey to discuss trade, economic and energy issues.