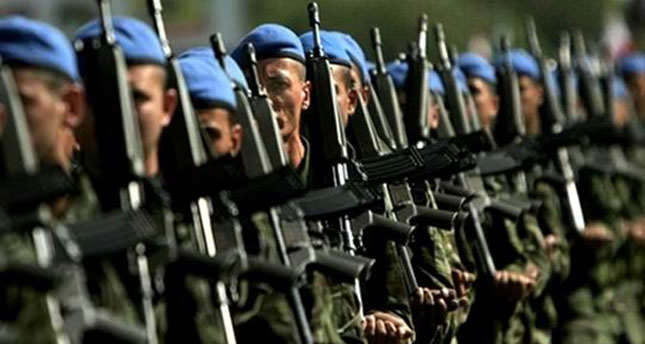 by daily sabah
Nov 27, 2014 12:00 am
The Turkish Supreme Military Council (YAŞ), chaired by Prime Minister Ahmet Davutoğlu for the first time since he took office in August, convened yesterday and discussed the steps to be taken to modernize the military, the threat posed by the Islamic State of Iraq and al-Sham (ISIS), Turkey's preparedness for a possible war, paid military service and, in particular, the Gülen Movement, which is alleged to have infiltrated key state bodies to overthrow the government.

The meeting during which the YAŞ's winter policies were discussed, was the first chaired by Davutoğlu as prime minister with President Recep Tayyip Erdoğan expected to sign the decision for the first time in his current position.

Allegations claiming the existence of a Gülenist structure within the TSK were on the main agenda of the council. The TSK published a press statement on their website Saturday denying the allegations and said: "The Turkish Armed Forces does not, and will not have any connections or partnerships with any illegal or clandestine organization. This is because the Turkish Armed Forces is a national army."

The Gülen Movement is seen as a national threat by the government since the movement is accused of wiretapping thousands of people including government officials, encrypting phones and allegedly infiltrating state institutions with the aim of overthrowing the government. The movement is led by retired imam Fethullah Gülen who lives in self-imposed exile in the U.S. Government officials have continuously expressed their determination to continue to lawfully fight against the Gülen Movement whose followers are accused of illegal wiretapping, forgery of official documents and spying.

Efforts to modernize the TSK and the current requirements and cadres of the institution were also tackled as the planning for the upcoming years regarding the institution is on the agenda of the council. A solution to meet the TSK's cadres' necessity in accordance with the decrease in the population growth rate and increase in the number of university graduates was reportedly sought in the meeting.

The October agreement between the U.S. and Turkey to train and equip moderate Syrian opposition groups in the fight against ISIS was on the agenda of the meeting. The decision taken in the council is expected to first be presented to Erdoğan and then announced to the public.