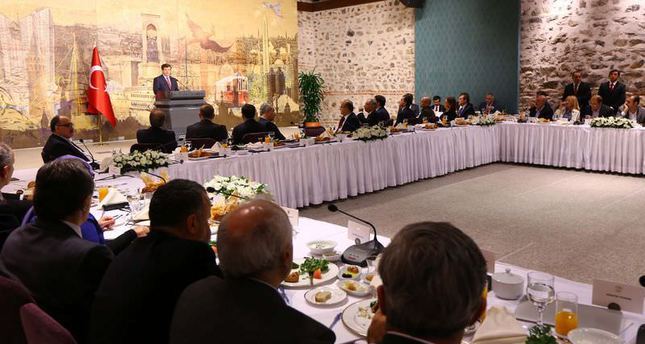 by Daily Sabah Nov 27, 2014 12:00 am
Numerous local and nongovernmental organizations (NGOs) from eastern and southeastern Turkey came together on Wednesday to announce their readiness to contribute to the reconciliation process. Furthermore, they suggested that local chieftains should be included to act as mediators between the government and the local population in order to help resolve Turkey's decades-long Kurdish issue. They also claimed that the Peoples' Democratic Party (HDP) does not represent the region as a whole.

Stating that local chieftains and notables would be more effective at informing the population about the reconciliation process, the NGOs stated that they want to take an active role in the reconciliation process. They claimed that the Wisemen Committee, composed of intellectuals and popular figures, alone was not sufficient to finalize the process, and it was necessary for local figures to participate in order to ensure the views of the public are conveyed and not bypassed.

Speaking to Turkish media outlets, Orhan Sami Gültekin, the president of Muş Foundation, pointed out that a structure resembling the feudal system exists in southeastern Turkey, and said it would be beneficial to sit down and talk with local sheikhs, landlords and similar figures who have an immense ability to influence the people.

Vedat Sağlam, the president of the Siirt Solidarity Association, has agreed to these sentiments and highlighted that the input of local chieftains is crucial. He emphasized that the HDP does not represent Anatolia as whole and said different opinions were necessary in order to have a productive process.

Other NGO leaders asserted that a "third party" is necessary to act as mediators between the public and the government. "We are more aware of our people's sensitivities," said Erzen, the chairman of a local organization based in Siirt. He noted that there are no problems with convincing people about the merit of the reconciliation process in Turkey's southeast.

Aydın Gürhan, the deputy chairman of the Federation of Associations in Erzurum, claimed the Kurdish issue could only be resolved by the inclusion and participation of NGOs, while others expressed they are ready to take on the reconciliation process at the expense of sacrificing their social lives and are ready to do whatever they can to ensure that everyone in the country can live equally in a peaceful atmosphere.

The Turkish government initiated the reconciliation process in early 2012 to end the 30-year conflict with the PKK and address the issues of the Kurds as part of the democratization package. Accordingly, a series of democratic reforms are being carried out to empower minorities including lifting barriers to language and removing many of the obstacles facing the Kurds.
Prime Minister Ahmet Davutoğlu has constantly affirmed that the reconciliation process is a unique and local initiative that will reach the desired point if all sides fulfill their responsibilities.

As part of the process, a committee consisting of delegates from the HDP is expected to pay a visit to the PKK's imprisoned leader Abdullah Öcalan on İmralı Island this Sunday.