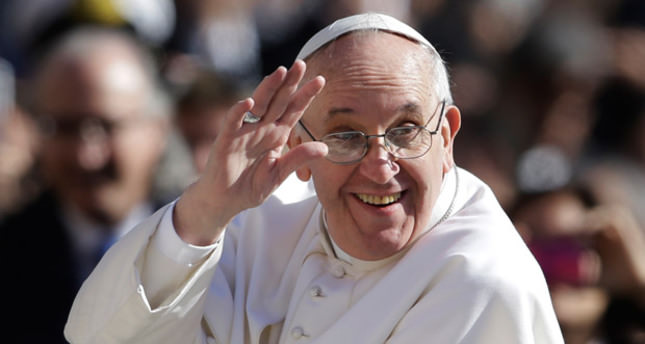 by daily sabah Nov 27, 2014 12:00 am
Pope Francis is set to arrive in Turkey on Friday for a brief visit to use his populist touch to rebuild bridges with the Islamic world that were damaged by his predecessor, Pope Benedict XVI.

It will be the first papal visit to Turkey since the now-retired Benedict visited in 2006 against a backdrop of anger in much of the Muslim world over comments that appeared to link Prophet Muhammad to violence. The frenzied atmosphere that dominated the run-up to that trip was followed by Benedict appearing to pray silently alongside the Grand Mufti of Istanbul in the city's celebrated Blue Mosque in what was seen as a gesture of reconciliation. The pope's spokesman, Federico Lombardi, said Francis may make a similar gesture of respect.

"Obviously one can't speak of a formal prayer on the part of a Christian in the Mosque," Lombardi said, adding, "The Holy Father will show his respect and spiritual contemplation but it will be without expressing it outwardly with words or anything else [since] he is of another religion. That seems to be to be only normal, good sense."

The three-day trip to the predominantly Muslim but officially secular state is also intended to bolster relations between the Roman Catholic and Orthodox churches, whose spiritual leader is Bartholomew, the Patriarch of Istanbul, at a time when the conflict between Ukraine and Russia has created the potential for tensions between the branches of Christianity.

The Vatican announced Tuesday that Francis's first stop on the trip will be a visit to the mausoleum of Mustafa Kemal Atatürk, the founder and first President of the Republic of Turkey. He will also meet Prime Minister Ahmet Davutoğlu and President Recep Tayyip Erdoğan.

The pope travels the next day to Istanbul, where he will visit the Sultanahmet Mosque, popularly known as the Blue Mosque, and the Hagia Sophia, a former Greek Orthodox patriarchal basilica that was transformed into a mosque and is now a museum.

While in Istanbul, the pope will also say a Mass at the Roman Catholic Cathedral of the Holy Spirit, participate in ecumenical prayers at the Church of St. George and meet with Bartholomew.

Francis's visit to Turkey will be his sixth trip outside Italy since his election in March last year. Francis was originally invited to Turkey earlier this summer by Bartholomew who had traveled to the Vatican to take part in prayers for peace between the Argentinian pope and Israeli and Palestinian leaders, according to Rome's La Repubblica newspaper and diplomatic sources.