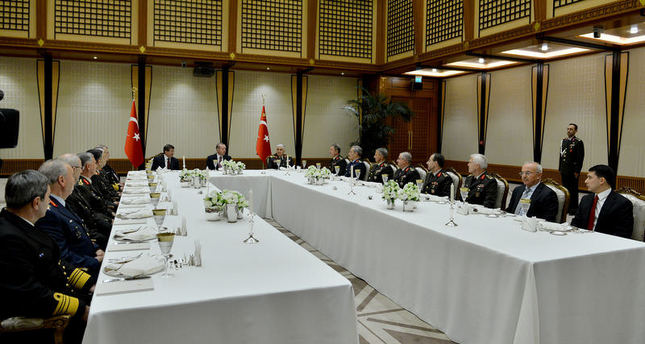 by Daily Sabah Nov 27, 2014 12:00 am
Turkey's Supreme Military Council (YAŞ) convened under the chairmanship of Prime Minister Ahmet Davutoğlu on Thursday, reviewed the army's readiness for combat and discussed the ongoing fight against terrorist groups in the region.
"During the meeting, officials discussed the Turkish Armed Forces (TSK)' primary program, necessary measures to be taken in the fight against terrorist groups and the army's readiness for combat," the TSK said in a written statement.
President Recep Tayyip Erdoğan approved the decisions made during the seven-hour YAŞ meeting.
Last Update: Nov 28, 2014 9:44 am
RELATED TOPICS