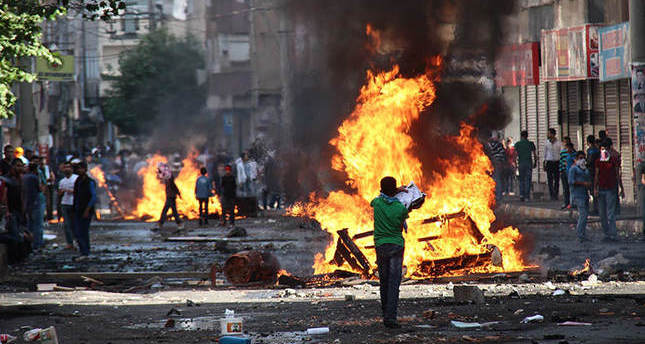 by daily sabah
Nov 27, 2014 12:00 am
A Public prosecutor's office seeks aggravated life sentences and 225 years in jail for two suspects who are accused of engaging in vandalistic acts during the protests that were staged in support of Kobani, a Syrian town besieged by self-proclaimed Islamic State of Iraq and al-Sham (ISIS), which claimed dozens of lives.

18-year-old Nihat T. and 22 year-old Yusuf Ö. have had a lawsuit filed against them after an indictment about the Kobani protests, which took place between October 4 and 7, was completed by Bakırköy Public Prosecutor's Office. The indictment revealed the details about the protests which were mainly confined to the southeast of Turkey and but also extended to some other provinces across the country including Istanbul.

Zeytinburnu district of Istanbul also saw heated protests during these dates sparked by pro-PKK Kurds asking for more support from the government to the their Kurdish fellows fighting to break the siege against ISIS.

The protests rapidly grew into clashes between pro- and anti- PKK groups that not only resulted in vandalism and aggression stemming from the tension between the factions but also led to the killing of dozens.

The protests were deemed a serious threat to the ongoing reconciliation process pursued by the government and the Peoples' Democratic Party (HDP) as the call of the party's leader, Selahattin Demirtaş, for the supporters to pour onto the streets led to suspension in the peace talks carried out by the two sides.

Meanwhile, prosecutors launched an investigation into the incident and prepared an indictment regarding the protests. A lawsuit with 62 plaintiffs was filed against the suspects for damaging a bank, vehicles and bus stops.

Allocating details of the protests that specifically intensified in Zeytinburnu district in Istanbul, Bakırköy public prosecutor's office submitted an indictment to court seeking aggravated life sentence and 225 years in prison for Yusuf Ö. and Nihat T. for several charges.

The suspects face aggravated life sentence for attempting to annul the unity of the state, two years in prison for intentionally putting security in jeopardy, 10 years for being a member of a terrorist organization, 202 years for damaging properties (of 62 plaintiffs) and refusal to disperse despite warnings, and five years for carrying out terrorist propagandas.