Pope thanks Turkey for hosting refugees, stresses pain of Palestinians 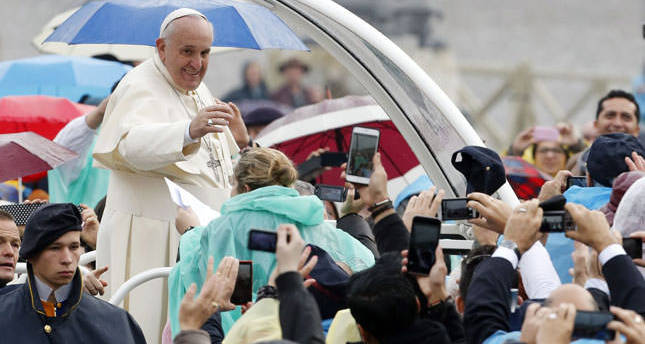 by daily sabah
Nov 28, 2014 12:00 am
In the first day of his visit to Ankara, Pope Francis addressed the problems of the 1.6 million refugees from the Syrian conflict being hosted in Turkey, although a previously rumored visit to a refugee camp no longer appears to be on the cards. "The international community has a moral obligation to assist Turkey in taking care of these refugees," Francis said alongside President Recep Tayyip Erdoğan. Pope Francis said: "There has been non-stop terrorist action, especially in Syria and Iraq. The most basic humanitarian rules are being violated and mass exiles of minorities are taking place. Not only Christians and Yazidis, but also hundreds of thousands of people are abandoning their homes just to survive and have the freedom to practice their religion. Turkey has shown a great deal of generosity and received many migrants." During the press conference with Mehmet Görmez, the head of the Directorate of Religious Affairs, the pope underlined the suffering of Palestinians, with Görmez saying, "Jerusalem, regarded as sacred by all three [Abrahamic] religions, should be a holy center for coexistence instead of being a conflict zone."