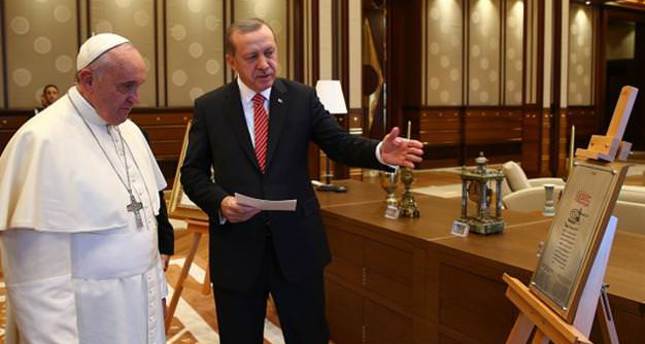 by daily sabah
Nov 28, 2014 12:00 am
Pope Francis received two special gifts from President Recep Tayyip Erdoğan on Friday during a welcoming ceremony at the Presidential Palace in the Turkish capital Ankara.

President Erdoğan presented the pope with an edict of Ottoman Sultan Mehmed II, the edict, which was presented in a silver-lined frame, holds a special meaning since it represented the Ottoman Empire's protection for the Christians' religious rights and life security during the 15th century.

Erdoğan's second gift to the pope was a Turkish-German dictionary of Islamic and Christian terms, published by Ankara University.

In return, Pope Francis gave President Erdoğan a mosaic depicting the "View of Castel Sant'Angelo". The mosaic was especially created for the occasion by the artists of the Vatican Mosaic Studio. Polychrome enamels were used, applied with oily stucco on a metallic base. The stucco is of the same formula as that utilized in past centuries to apply the mosaics in St. Peter's Basilica.