Turkey denies claims of being ISIS base 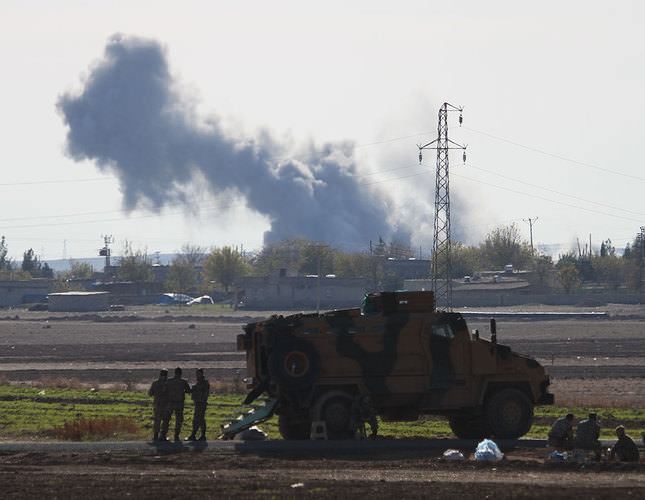 by Daily Sabah with Agencies Nov 29, 2014 12:00 am
The Islamic State of Iraq and al-Sham (ISIS) carried out a suicide attack on armed Kurdish factions in Syria's Kobani, near the Turkish border. While the Britain-based Human Rights Observatory Group confirmed the attack, no casualties were reported due to the difficulty of receiving information. Also, Kurdish groups said the assault began when a suicide bomber driving an armored vehicle detonated his explosives on the border crossing between Kobani and Turkey. Nawaf Khalil, a spokesman for Syria's Kurdish Democratic Union Party (PYD), which is the official branch of the terrorist PKK organization, said: "ISIS used to attack the town from three sides. Today, they are attacking from four sides." A Turkish government statement on Saturday confirmed that one of the suicide attacks involved a bomb-loaded vehicle that detonated on the Syrian side of the border. But it denied that the vehicle had crossed into Kobani via Turkey. "Claims that the vehicle reached the border gate by crossing through Turkish soil are a lie," read the statement released by the government press office at the border town of Suruç. "Contrary to certain claims, no Turkish official has made any statement claiming that the bomb-loaded vehicle had crossed from Turkey. The security forces who are on alert in the border region have taken all necessary measures," the statement continued.

Although Turkey supplies logistical aid to Kurdish fighters and the peshmerga who have entered Kobani to help other Kurdish fighters passing through Turkish territories and has received more than 200,000 refugees from Kobani, PYD officials accused Turkey of helping ISIS. However, President Recep Tayyip Erdoğan called for a broader strategy to eradicate ISIS from the region and said on Saturday: "Airstrikes alone would not stop ISIS unless accompanied with a ground operation. ISIS currently has 40 percent of Iraq under control. We have a similar situation in Syria as well. Airstrikes are not enough to stop this occupation," adding that a ground operation was in order. "Turkey is determined to fight against this threat, and we expect the same determination from the international community," he said.