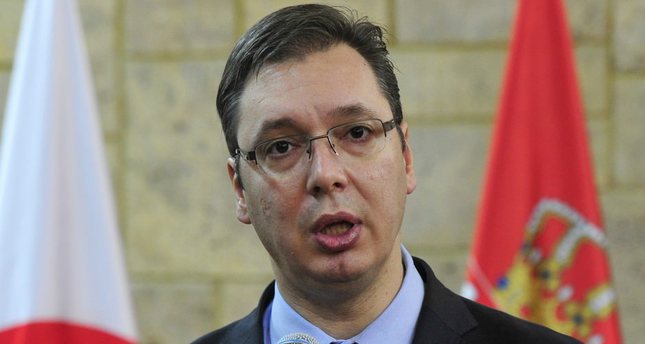 by AA
Nov 29, 2014 12:00 am
Serbian Prime Minister Aleksandar Vucic met with Turkey's ambassador to Belgrade Mehmet Kemal Bozay to discuss the death of a Serbian sports fan in Istanbul. Marko Ivkovic, 25, a Serbian basketball fan, was killed in Istanbul last week before a Euroleague basketball game. Vucic told Anadolu Agency reporters after his meeting that he conveyed to Ambassador Bozay Serbia's demands to Turkish authorities to complete the investigation regarding the murder of Ivkovic. "We are satisfied with the responses we received from Turkey and in the coming days we expect the perpetrators of the crime to be taken into the [sic] custody," said Prime Minister Vucic. Ambassador Bozay said that he informed Serbian authorities about the most recent developments in the investigation. "I told them the investigation into the incident is ongoing and that I will inform them of any developments," the ambassador said. Bozay said that "preserving the good relations between Serbia and Turkey " was the important issue. The authorities involved should take the necessary measures, he added. Vucic told the ambassador that Turkish citizens living in Serbia were not threatened, and the government had taken all measures necessary for their protection.