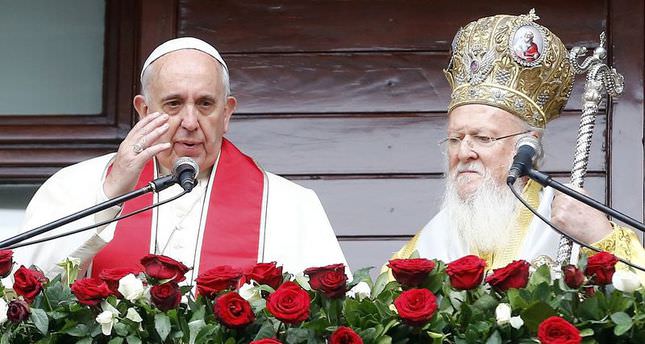 The spiritual head of the Catholic world, Pope Francis, and the ecumenical patriarch of the Eastern Orthodox Church, Bartholomew I, issue a message of unity from Istanbul and call for an end to the millennium-old schism that divides Christianity

Spiritual leaders from the Catholic and Orthodox Churches signed a Common Declaration on Sunday in an attempt to forge stronger ties between the two flocks and called for interfaith dialogue. Leaders of the Armenian and Assyrian Orthodox Churches of Turkey were also present at the joint Mass conducted by Ecumenical Patriarch Bartholomew and Roman Catholic Pope Francis.

The Mass was interpreted by some as cementing efforts to heal the 1,000-year-old schism between the 300 million followers of Orthodox Christianity and the world's 1.2 billion Roman Catholics. "We cannot resign ourselves to a Middle East without Christians," the pope and patriarch said in a joint statement, noting that members of the faith have lived in the region for 2,000 years.

Pope Francis and Ecumenical Patriarch Bartholomew, the Istanbul-based leader of many of the world's Orthodox Christians, met at the Patriarchate in Istanbul as part of the three-day visit of the 77-year old pontiff in Turkey. The two leaders emphasized the importance of the declaration for "Christian unity and momentous impact on the suffering of Christians in the Middle East."

"We also recognize the importance of promoting a constructive dialogue with Islam based on mutual respect and friendship," the joint common declaration said. "Inspired by common values and strengthened by genuine fraternal sentiments, Muslims and Christians are called to work together for the sake of justice, peace and respect for the dignity and rights of every person, especially in those regions where they once lived for centuries in peaceful coexistence and now tragically suffer together the horrors of war."The declaration was signed after the Divine Liturgy to commemorate the feast of St. Andrew the Apostle on November 30. Along with Pope Francis, Greek Foreign Minister Evangelos Venizelos, Turkey's chief rabbi, Itzhak Helava, as well as senior figures from other Christian churches attended the service celebrated by Bartholomew.

Bartholomew became the first Orthodox patriarch to ever attend a papal inauguration ceremony since the split between the two churches when he took part in Pope Francis's inauguration last year at the Vatican. The leaders of Catholic and Orthodox Christianity also called for an end to the conflict in Ukraine and "respect for international law" in resolving the violence. Vatican spokesman Federico Lombardi said there was still a way to go before there could be true and total unification of the churches, but noted that the pope and patriarch have been meeting frequently in an "incredibly friendly, cordial way."

As part of his interfaith efforts during the trip, Francis also met Turkey's chief rabbi on Sunday, after spending time with Muslim leaders on Saturday.

During the second day of his visit, Francis and Bartholomew prayed for world peace on Saturday in the Church of St. George. The service took place after Francis celebrated a special Mass at the Catholic Cathedral of the Holy Spirit in the city's Beyoğlu district.

In 2006, Pope Francis' predecessor, Benedict XVI visited the same mosque during a visit to Turkey.