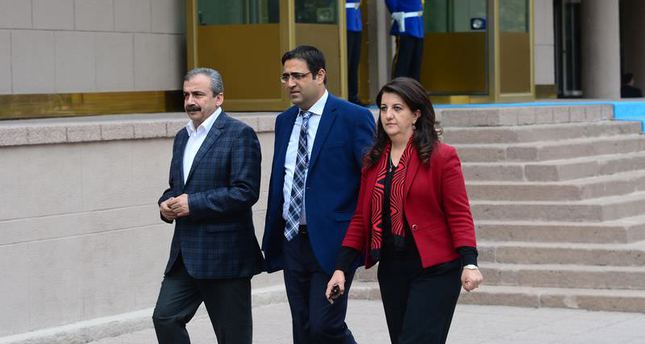 by Daily Sabah Nov 30, 2014 12:00 am
Peoples' Democratic Party's (HDP) İmralı Committee has released a statement following their visit to PKK's imprisoned leader Abdullah Öcalan in İmralı Prison on Saturday and stated they are expecting to reach serious democratic reconciliation within the next five months.

It was reported that the meeting lasted for four hours and was attended by HDP deputies including Pervin Buldan, Sırrı Süreyya Önder, İdris Baluken and Hatip Dicle, who has recently been added to the committee. They discussed a number of issues including the current situation of the reconciliation process, the government's policies and approach to the issue, as well as recent developments in the Middle East with focus on Kobani and Rojava.

According to the statement, Öcalan has underscored the importance of creating legal guarantees for the upcoming stages of the reconciliation process to establish permanent peace and democracy. He said that the democratic resolution of the process would set a precedent for the Middle East, while noting the failure to continue in a serious and determined manner would deepen the chaos in the region and pave the way for coup d'etats in the future.

Öcalan has also highlighted the importance of creating a monitoring board to carefully watch and inspect the ceasefire process, while he argued the only way to permanently preserve public order could be possible through such independent board.

It was also noted that the draft negotiation plan entitled "Peace and Democracy Negotiation Process Draft" would be shared with the public while Öcalan stated both parties have discussed the framework in detail and agreed on a framework regarding the plan.

The Turkish government initiated the reconciliation process in early 2012 to end the 30-year conflict with the PKK and address the issues of the Kurds as part of the democratization package.

Accordingly, a series of democratic reforms are being carried out to empower minorities including lifting barriers to language and removing many of the obstacles facing the Kurds.

Prime Minister Ahmet Davutoğlu has constantly affirmed that the reconciliation process is a unique and local initiative that will reach the desired point if all sides fulfill their responsibilities.