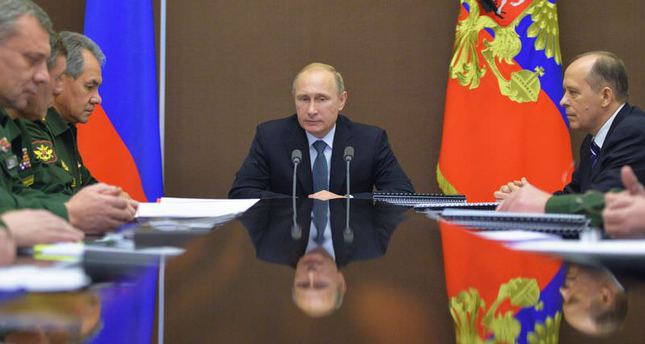 Russian President Vladimir Putin’s upcoming visit to Turkey on Dec. 1 has been upgraded to the highest level, the Kremlin has said

Russian President Vladimir Putin is scheduled to arrive in Turkey today for a "state visit" – as opposed to the usual "working visit" – Kremlin Advisor Yuri Ushakov told Russian media on Friday. The Kremlin had issued a statement on November 24 that said "the president of Russia will make a working visit to the Republic of Turkey to participate in the fifth session of the High Level Cooperation Council." Countries rank the visits of foreign heads of states in three categories or more. The highest-ranking visit is a "state visit," followed by an "official visit" and then a "working visit."

The difference between the visits is largely ceremonial. The state visit requires the host state to hold a number of ceremonies, including arrival ceremonies, the playing of national anthems, full-military honors and a lunch or dinner held by the host head of state in honor of the guest head of state.

Ushakov said that Putin would have an intensive agenda that includes a visit to the Anıtkabir – the mausoleum of the founder of Turkish Republic, Mustafa Kemal Atatürk. Putin will also meet Turkish President Recep Tayyip Erdoğan and is expected to discuss bilateral relations, natural gas agreements and international relations, mainly the Syrian crisis, the advisor added.

The fifth session of the High Level Cooperation Council is expected to discuss a wide range of issues including Russian-Turkish cooperation in the trade, economic and energy sectors as well as the international agenda. "Following the talks, many bilateral documents are expected to be signed," the advisor added.

During his visit, Putin will chair the fifth summit of the Turkish-Russian High-Level Cooperation Council (ÜDİK) with Turkish President Recep Tayyip Erdoğan. While this visit of Putin seems to be of capital importance in the history of Turkish-Russian relations since the Russian president is coming with a team of 10 ministers, it is expected that a variety of issues are going to be discussed in the bilateral meeting between Erdoğan and Putin. Among them are increasing trade volume between the two countries, the nuclear plant project in Akkuyu, Turkey's demand for a price reduction in natural gas and the conflicts in Syria and Crimea.

Dr. Vügar İmanbeyli, professor at Istanbul Şehir University, mentioned that the ÜDİK's summits had been attended by high-level officials from both countries. "Since 2010, this council's meetings have already been held with the participation of six-to-seven ministers or highlevel officials under the chairmanship of presidents or prime ministers from both countries. This mechanism can be seen,of course, as one of the most important diplomatic instruments for consolidating bilateral relations with countries near or abroad in the last decade," he said.

One of the hot topics on the Russian president's agenda is Turkey's long standing demand for a price reduction in natural gas, of which Turkey has tripled its consumption since 2000 to almost 47 billion cubic meters, with further increases expected as both its economy and population grow. Senior expert at the Center for Eurasian Studies (AVİM), Aslan Yavuz Şir, expects that Turkey's demand will receive a positive response in this visit and the ÜDİK meetings. Şir believes that sanctions imposed on Russia brought the economy to a standstill and forced the administration to revise its economic objectives.

Şir says "Russian Central Bank stated in this week that outflow of $128 billion of foreign capital is predicted in the year of 2014. It is also depicted that in case of 30% decrease in oil prices, $100 billion of loss in Russian economy might be seen. If we add Russia's $40 billion loss in the last three months into these data, it can be said that Russia would affirm Turkey's price reduction demand in order to protect its trade relations with Turkey and to sustain its economy."

The Chair of Russian-Slavic Studies Center at the 21st Century Turkey Institute Sabir Askeroğlu does not think that the Crimea issue will discredit Turkish-Russian economic relations and claims that Turkey, despite not recognizing the annexation of Crimea, does not want to break the relations off. "As a result of sanctions imposed on Russia due to the Ukraine Crisis and annexation of Crimea, the trade volume between the West and Russia has decreased. Turkey aims to set a market up for itself by filling particular parts of this gap. Namely, Turkey plans to increase its trade volume with Russia which suggests that even the Crimean issue would not affect Turkish-Russian trade relations."

Since the civil war in Syria broke, eventually evolving into a quagmire, Turkey and Russia have taken different positions regarding the region. Despite the increasing volume of trade and developing economic relations, both countries witnessed huge disagreements regarding Syria, in political terms. Being a critical issue between the two countries, it is expected that Syria will have a large presence on the discussion table during the visit.

International relations expert Alexander Sotnichenko, from Saint Petersburg State University, reminds that both Turkey and Russia have been successful in ignoring the controversies in Syria and emphasized that bilateral relations is more important than different views of Syrian conflict. Sotnichenko says: "It's a good time for Turkey to change their policy towards Syria, and Russia can be a good mediator in a possible reconciliation between Ankara and Damascus. Turkey's policy in the Middle East is very dynamic, and I don't see any problems in the restoration of Turkey's '0 problems policy' in Syria."