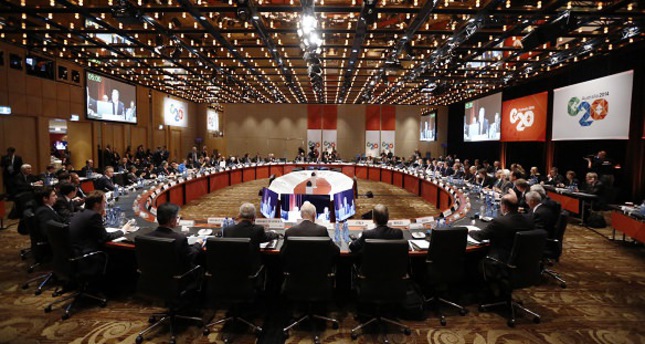 by Daily Sabah with AA Dec 01, 2014 12:00 am
Turkey officially took over the presidency of the G20 yesterday. Deputy Prime Minister Ali Babacan said at a press conference in Ankara, the Turkish capital, that three words will guide Turkey in 2015: inclusivity, implementation and reforms. The 10th G20 Annual Summit will be held in Antalya, a southwestern province, on Nov. 15-16, 2015.

The government continued to emphasize the value of inclusivity and becoming a voice for everyone since the G20 Summit held in Brisbane, Australia last month and Babacan reinforced that the "aim [is] to make the G20 reach out to low-income countries and take care of countries that are not G20 members in an inclusive way. Turkey will bridge the gap between developed economies and undeveloped countries to fight global inequality." The host country may invite the countries that would add value during its presidency, and Singapore, Spain and Azerbaijan will be invited to the G20 Summit in 2015.

The members of the G20 include the EU and 19 individual countries: Argentina, Australia, Brazil, Canada, China, France, Germany, India, Indonesia, Italy, Japan, the Republic of Korea, Mexico, Russia, Saudi Arabia, South Africa, Turkey, the United Kingdom and the United States. The EU is represented by the European Commission and European Central Bank (ECB).

Turkey took over the presidency of the G20 from Australia, and China will in turn preside over the summit in 2016. It is a key group for tackling the world's economic challenges such as unemployment and income inequality and is responsible for continuing to direct the global economy as it emerges from the recent financial crisis.